Norm of the North movie review: Fails to entertain beyond a point

Aimed at entertaining kids, "Norm of the North" is a meandering animation film that leads you onto an adventurous trip, but lacks the trappings of a memorable journey. 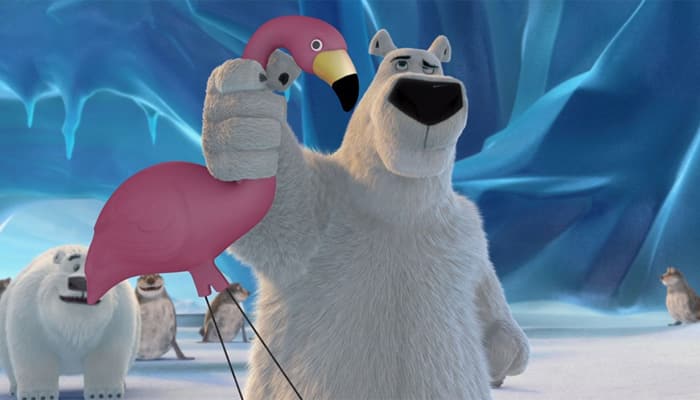 Aimed at entertaining kids, "Norm of the North" is a meandering animation film that leads you onto an adventurous trip, but lacks the trappings of a memorable journey.

It is the story of Norm, the "gifted" Polar bear, who is the grandson of the King of the Arctic and is touted to be the future king. The gift he possesses is his unique ability to talk to humans.

It is when he chances upon an advertisement being shot by Mr. Greene, the wealthy and corrupt property developer from New York City who is planning to build luxury condominiums in the Arctic, he realises that his home is in danger and would soon be invaded by human tourists.

Meanwhile, his grandfather goes missing and Socrates, the wise seagull, advises and motivates him to save his home. So, accompanied by three furry, mischievous lemmings, Norm stows away on a ship to New York City. How he saves his grandfather and his homeland from the crafty Mr. Greene, forms the crux of the story.

The humour is staid and lacks originality. The script written by a group of five writers is simple and lively, but unenthusiastically layered. Packed with messages like, "A king always fights for his home", or "Save the Arctic and save our homes," are meaningful, but are delivered in a loud and brusque manner.

While the characters are lazily etched, the energetic and engaging voices lent by the ace cast that include Rob Schneider (Norm), Heather Graham (Vera), Bill Nighy (Socrates), Gabriel Iglesias (as Pablo and Stan), Loretta Devin (as Tamecia), and Colm Meaney (Grand Father) resonate with the right blend of emotion. But, it is Ken Jeong's voice as Mr. Greene that stands apart.

Visually, the snow-filled landscape is almost real and eye catching. But the monotony of the palette and dull 2D animation is what makes the viewing tedious.

The songs mesh seamlessly into the narration and the background score elevates the viewing experience, but at the same time it fails to enthrall viewers.

Overall, "Norm of the North" is just a cuddly bear that fails to entertain you beyond a point.