Rameswaram is perhaps the only place in the country where the rail route to the temple town offers a lifelong memorable experience. 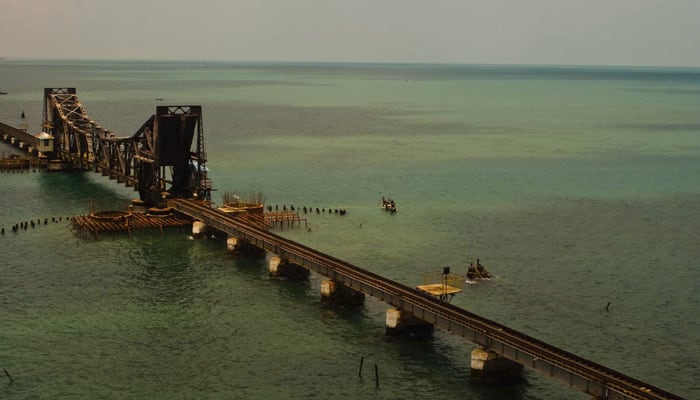 Chennai: Rameswaram is perhaps the only place in the country where the rail route to the temple town offers a lifelong memorable experience.

As the train slowly crosses the railway bridge connecting the Indian mainland and the Pamban Island in Rameswaram, one is fascinated looking at the sea below. This turns into thrill as the train enters the 1941-built cantilever railway bridge that opens upwards in the middle for ships to pass under.

A slight fear creeps in when one remembers the story of the washing away of the Boat Mail train with over 110 passengers and the Dhanuskodi some kilometres away from Rameswaram by a huge tidal wave in 1964.

"The attitude of pilgrims has changed over the years. They are on the lookout for invigorating experiences," Michael Dass Fernando, proprietor of Holy Island Water Sports Rental Services, told IANS.

"After praying at the Rameswaram temple, people want to explore. Rameswaram has changed over the years. Fifteen years ago, there were just four lodges. Now there are around 200. People are converting their homes into lodges," Fernando said.

Though several new star hotels have come up, the 56-room Hotel Tamil Nadu, on the sea shore and near the main temple, is strongly recommended.

The hotel's relatively low tariff, the greenery, the big children's play area with swings and slides, (where ducks give you a welcome peck, and where pigeons of every shade roost) would make the stay memorable for everyone.

One can also watch the fishing boats going to the jetty, while enjoying the morning breeze with a hot cup of coffee.

A half hour boat ride is available outside the hotel.

"The days are not far off when corporates start holding their conferences here as there is something for everybody," M. Guneswaran, manager, Hotel Tamil Nadu, told IANS.

Even for the not-so-religious, the holy dip in the sea and the bath at the 22 holy 'theerthams' (wells) in the Ramanathaswamy temple itself is an experience.

The temple has the world's longest corridor with 1,212 pillars.

The island has many temples and other holy places which, as per legend, are associated with Lord Rama and his efforts in building a stone bridge across the sea to Lanka to bring back Sita.

Autorickshaw drivers offer different packages to visit Ramar Padam, the place where Lord Rama stood and surveyed the area below to build the bridge to Lanka. One can also get the picturesque view of the island from that spot.

According to legend, Lord Rama broke the bridge that he and his monkey army built to Lanka with his bow. Hence the place got its name Dhanush (bow) Kodi (end).

The easiest way to reach Dhanuskodi is to take an autorickshaw which would stop a few kilometres from the ghost town.

There one can hop into a van (Rs.150 per head) which would ride on the backwater wet sand.

The ride helps to see beautiful birds hopping around the sand and some stretches of the erstwhile railway track.

The van stops where the Dhanuskodi railway station used to be.

There are some stalls selling tender coconut water, sea shells, fried fish and the like.

"The three tall towers are the support structures for the water tank for the steam engines," Illangaian, a sea shell shop owner, told IANS.

The enormity of the loss sinks in as one sees the ruins of a post office, church, customs office, port office and a Murugan temple.

The big post office building is now filled with white sand. "Many submerged structures came to our view briefly when the sea water receded several metres during the 2004 tsunami," Illangaian told IANS.

Though termed a ghost town, it is home to around 350 huts and around 600 people.

Illangaian's wife Tamil Selvi told IANS that the increase in tourist traffic has led to higher incomes for people.

At the sea, one can see a confluence of contrast: the calm Bay of Bengal and the rough Indian Ocean.