Liverpool have six points from two games after their opening 4-1 home win over Norwich City. Either champions Manchester City or Tottenham Hotspur, who were playing each other in the 1630 GMT kick-off, can leapfrog them. 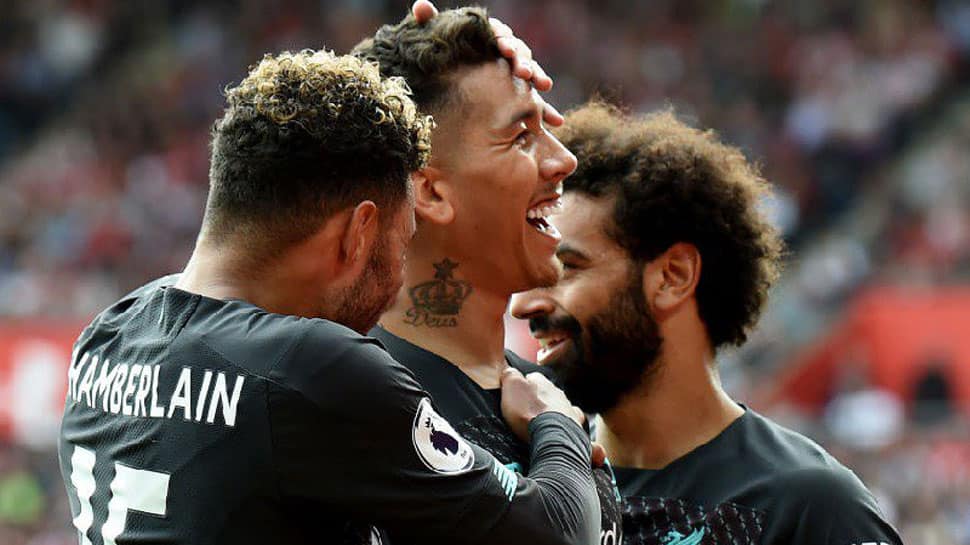 Liverpool provisionally moved into the Premier League`s top spot after superb individual goals by forwards Sadio Mane and Roberto Firmino gave them a nervy 2-1 win at Southampton on Saturday.

Liverpool have six points from two games after their opening 4-1 home win over Norwich City. Either champions Manchester City or Tottenham Hotspur, who were playing each other in the 1630 GMT kick-off, can leapfrog them.

The result pleased Liverpool manager Jurgen Klopp after they equalled a club record of 11 successive Premier League wins and the German defended his stand-in goalkeeper Adrian, whose late howler let Southampton back into the match.

"Adrian had a swollen ankle and we played too many balls back to him," Klopp was quoted as saying by Liverpool`s official website.

"I was happy with everything he did today, all the saves, all that stuff."

"Sadio scored a fantastic goal in pretty much the best moment... of the first half, in the last second pretty much. That helped, of course, and in the second half we made other big steps."

The European champions looked weary in the opening 30 minutes after their penalty shootout win over Chelsea in the UEFA Super Cup in Istanbul on Wednesday but Mane fired them ahead against the run of play.

The lively Senegal forward teed himself up on the edge of the penalty area on the stroke of halftime and curled a rasping shot past home goalkeeper Angus Gunn, who was left clutching at thin air.

Liverpool dominated after the break and missed several chances before Firmino picked up a loose ball, side-stepped a defender and drove a crisp low shot past Gunn in the 71st minute.

But the visitors barely hung on in the closing stages after Adrian, deployed after first-choice Allisson Becker suffered a long-term injury against Norwich, gifted the battling home side a lifeline.

The Spaniard`s poor clearance rebounded off Danny Ings into the back of the net and the former Liverpool striker missed a gilt-edged chance to snatch a late draw for the Saints when he skewed wide a close-range shot in the 87th minute.

"After playing 120 minutes on Wednesday it was not easy," he told the BBC.

"But we got the three points and I think we deserved it. Once we scored the first goal it was easier for us."

Mane had mixed emotions about scoring against his former club and conceded Liverpool were rattled by Adrian`s blunder.

"I`m sorry I have to score but I`m wearing a Liverpool shirt now. Southampton was a very good step for me, I have big respect for this club."

"(After Southampton`s goal) I was nervous because it wasn`t over. We had another 10 minutes to go. It can happen, it is part of football."