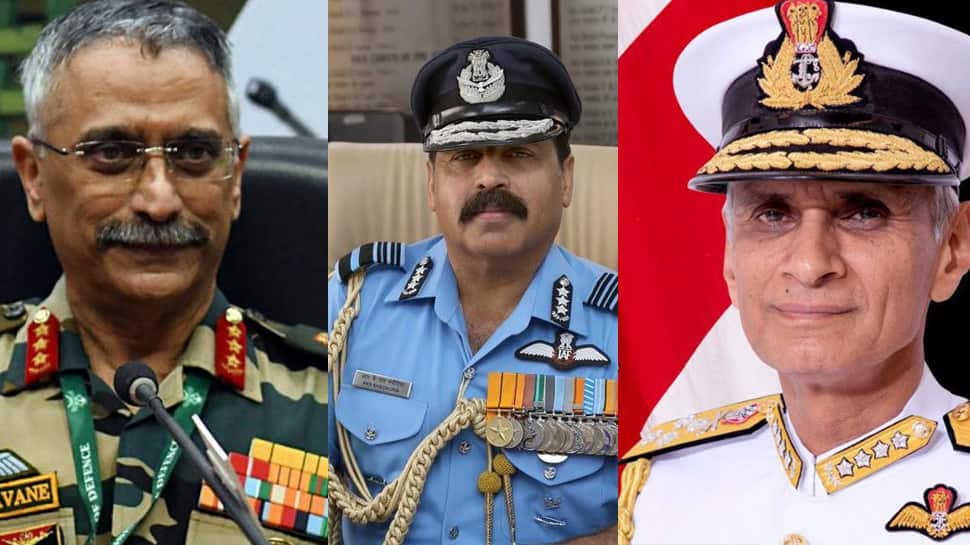 NEW DELHI: Lieutenant General Manoj Naravane will be the next Indian Army Chief after General Bipin Rawat demits office on December 31, 2019. Once Lt Gen Naravane assumes charge, he will create history along with Navy Chief Admiral Karambir Singh and Indian Air Force (IAF) Chief Air Chief Marshal RKS Bhadauria as all the three are from the same course of the premier National Defence Academy (NDA).

The trio joined the 56th course at the NDA in 1976 and passed out from the training academy together three years later. After the successful completion of the three-year course at the NDA, which admits around 350 cadets each in two courses every year, the three went to their respective service academies before getting commissioned as officers in June-July 1980.

Back in 1976, the three cadets were just 17 years old. Admiral Karambir Singh, who took over as Navy Chief on May 31, 2019, displays the wings of a helicopter pilot on his white uniform. ACM Bhadauria, who assumed office on September 30 this year as IAF chief, wears the wings of a fighter pilot on his blue uniform. Lt Gen Naravane, who will take over as the 28th Army chief this month-end, has a paratrooper’s wings on his olive-green uniform.
Since all the there services chiefs are coursemates from the NDA, it’s anticipated that there will now be a better synergy between the three services.

Better synergy among the Army, Navy and IAF is also critical as the government is in process to appoint the first-ever tri-service chief or Chief of Defence Staff (CDS), which will be followed by integrated theatre commands in the long run.

Besides being NDA coursemates, the three services chief have one more common link between them – their fathers were in the the IAF.

Naravane's father and Admiral Singh's father had served together in the IAF and were friends due to which Naravane and Karambir have known each other for a long time even before joining their respective forces. IAF chief Bhadauria's father had also retired as an Honourary Flying Officer from the IAF.

Interestingly, Lt Gen Naravane's father had joined the National Defence Academy as an Army cadet but had to leave the course midway due to an injury. He later joined the Indian Air Force as an officer cadet after completingg his graduation from a college in Maharashtra.

Lt Gen Manoj Mukund Naravane was named as the  next Army chief on Vijay Diwas which falls on December 16.

Lt Gen Naravane, who is currently the Vice Chief of Army Staff, will take over as the 28th Army Chief. Lt Gen Naravane is also the senior-most Army officer after Gen Rawat and was commissioned into the Sikh Light Infantry Regiment in June 1980.

India has a total of 1.4 million active defence personnel and 11.55 lakh reserve force, as well as 20 lakh paramilitary personnel. According to the World Economic Forum, the country's defence budget was USD 67 billion in 2017.

The strength of the Indian Army is as follows -