The idea of the human chain was to promote CM Nitish Kumar's pro-environment conservation slogan of ‘Jal-Jeevan-Hariyali’. 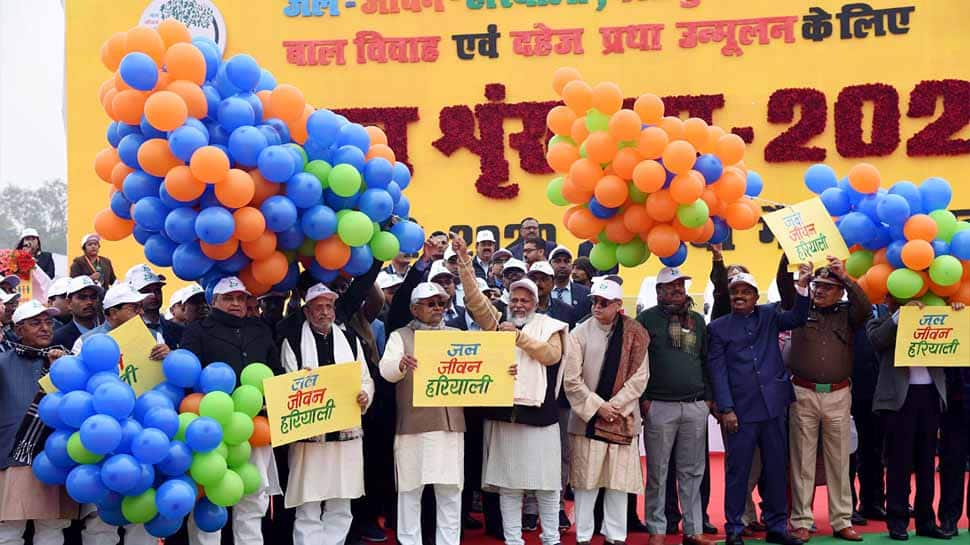 New Delhi: Bihar became a part of history on Sunday (January 19) when it succeeded in forming a human chain which was more than 18,3400-kilometer long, covering the entire Gangetic belt from Buxar to Bhagalpur on the border with Jharkhand. The idea was to promote Chief Minister Nitish Kumar's pro-environment conservation slogan of ‘Jal-Jeevan-Hariyali’ (water-life-greenery).

Chief Secretary Deepak Kumar in a press conference announced that they have succeeded in creating a new record, breaking their own previous record. He said that the human chain was 18.34 thousand kilometres long and as many as 4.27 crore people were estimated to have taken part in the event.

He said, "In the main city, more than three crores 45 lakhs people participated, while on the ward level more than one crore 13 lakh and 44 thousand people stood forming the human chain. At the school level, as many as 57 lakh and 76 thousand children, teachers and other staff members took part."

The state government used the services of four helicopters, three planes and more than 100 drones to capture the event. The estimated cost for the event was 15-16 crores, declared Kumar.

The event was also marred with the news of two deaths which occurred during the formation of the human chain. The government has announced an ex gratia of Rs 4 lakh for the kin of the deceased.

"So many trees were cut by Nitish Kumar for making highways and for the other so-called development works. Water is being wasted every day from the faulty taps in the government offices while the CM keeps talking about Jal, Jeevan and Hariyali. He is going to make the school children stand in this cold weather for the human chain, who will take responsibility if they fall sick?" Yadav told reporters on Saturday.

The Congress party put up posters accusing the JDU-BJP coalition government of failing to deliver on many promises. They alleged that there are problems such as dowry-related deaths, loot, corruption, rapes, brain drain, unemployment, among other crimes in Bihar.

In 2018, the Nitish Kumar-led state government had organised a similar event in which the human chain was 14 thousand kms long with as many as 3.5 crore people standing against dowry and child marriage. In 2017, the chain was 11,292-km long with 2 crore people in support of the liquor ban.