Delhi Chief Minister Arvind Kejriwal has also responded to the issues raised by the LG by sending the file of doorstep delivery of ration to him again. The CM has said that he studied the note of the Lieutenant Governor in which there appears to be a serious misunderstanding. 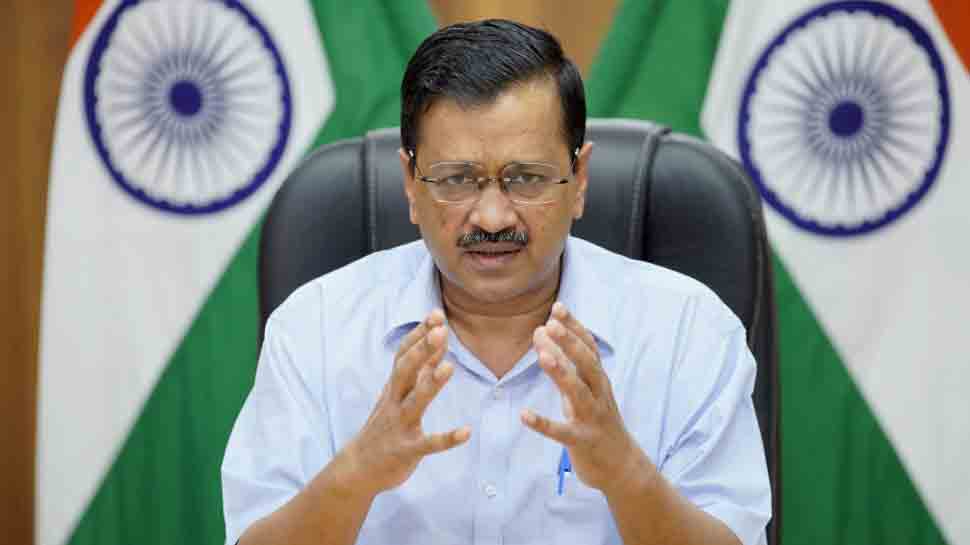 New Delhi: Delhi Chief Minister Arvind Kejriwal has once again sent the file of the home-delivery scheme of ration to the Lieutenant General for approval. The CM, while responding to the objections of the LG, said that the scheme of doorstep delivery of ration is in accordance with the law and was being implemented to follow the orders of the central government. It is wrong to halt this scheme during the Corona period as by implementing it, crowding at ration shops can be avoided. The CM has said that the LG was informed about the cabinet's decision regarding the doorstep delivery scheme of ration four times in the last three years, but he never opposed it. In February last, the notification was issued to implement this scheme, and even then LG did not protest. All that the Central Government objected to was removed, and even the High Court did not stay it during its five hearings. During the court case, the central government did not inform about any approval, so why is the scheme being stopped?

Chief Minister Arvind Kejriwal has also responded to the issues raised by the LG by sending the file of doorstep delivery of ration to him again. The CM has said that he studied the note of the Lieutenant Governor in which there appears to be a serious misunderstanding. The immediate matter before the LG is not the approval of the doorstep delivery scheme of ration. This plan has already been finalized.

Cabinet's decision on the home delivery scheme of NFSA ration

The CM has said that the Council of Ministers, through a cabinet decision dated 06 March 2018, had approved the scheme to deliver ration (wheat, whole flour, rice, and sugar) at the doorstep of the beneficiaries under the Targeted Public Distribution System (TPDS). Delhi State Civil Supplies Corporation (DSCSC) was approved as the single implementing agency for the project and Rs 677 crore was sanctioned as an outlay on the project. The decision of the cabinet was relayed to the LG office and there was no protest against the plan by the LG.

Thereafter, the cabinet approved some amendments in the scheme on 21st July 2020 and decided to name the scheme 'Mukhyamantri Ghar-Ghar Ration Yojana' (MMGGRY). The cabinet also decided that to facilitate the implementation of the 'One Nation, One Ration Card' (ONORC), e-POS devices will be installed in all FPSs; the e-POS, One Nation, One Ration Card, and ' Mukhyamantri Ghar Ghar Ration Scheme' will be implemented simultaneously. The LG's office was informed of the cabinet's decision and no objection was raised by him.

Further, on 09 October 2020, the Cabinet decided on the implementation aspects of the scheme and approved its implementation in two phases. The office of the Lieutenant Governor was also informed about this decision and no objection was expressed by the LG on this decision.

Thereafter, the Delhi government released the tenders on 15 October 2020 and 19 October 2020 and started preparations for the implementation of the scheme. Further, the scheme was notified on 20 February 2021 and a copy of this notification was sent to LG. As per the Supreme Court order dated 04 July 2018, the LG had one more opportunity to raise its objection to the said scheme/notification, but the LG did not object to the same. Hence this plan has been already approved.

Objections of the central government removed

The Delhi Government received a letter from the Central Government on 19 March 2021, in which objection had been raised regarding the name of this scheme. Although not legally required, the name of the scheme was dropped in the cabinet meeting held on 24 March 2021 to avoid any controversy. Through this decision of the cabinet, all the objections raised by the central government were removed. The cabinet decided that the scheme would no longer have a name; however, all steps taken for implementation of the scheme including tenders shall remain valid. A copy of this decision of the cabinet was also given to the LG, but the LG did not express any objection to it. A new notification was sent to the LG on 24 May 2021 to give effect to this decision of the cabinet and to remove everything that the central government objected to. This is a new notification that needs immediate consideration. Now the LG has to decide whether to agree with the new notification, which removes the things objected to by the central government.

After receiving the aforesaid opinion of the LG, the Delhi Government has written to the Central Government on 15th June 2021 informing that it has cleared all their objections by way of a Cabinet decision dated 24th March 2021. The details of the scheme have also been given to the centre.

The Kejriwal government plans to implement an order given by the central government on 01 February 2018. In this order, the Central Government has directed all state and union territory governments to ensure home delivery of ration to senior citizens, differently-abled, and pregnant women. As per the instructions of the Central Government, arrangements are being made for home delivery of ration and FPS will continue to exist. However, the Delhi government has gone a step ahead and implemented a doorstep delivery scheme for all its citizens benefitting pregnant women, disabled citizens, and senior citizens as well. Under this scheme, every citizen will be given an option whereby they can take ration either through FPS or home delivery.

As mentioned by the LG in his note, a petition has been filed in the Delhi High Court by an association of ration shopkeepers seeking a stay on the scheme. The matter has already been heard five times and the High Court has refused to grant a stay on the same. The Central Government has also filed its affidavit in this matter and the has not mentioned anywhere in its affidavit that the said scheme of the Delhi Government needs approval from the Central Government. When the Central Government does not feel that their approval is required, the request of the LG to refer the matter to them does not seem right. In view of the Corona pandemic, the Delhi government had planned to implement the scheme immediately in the coming few days, but in view of the objections of the LG, it has been unfortunately put on hold.

The CM says that during the first wave of the pandemic, the beneficiaries were not able to use wheat due to the closure of flour mills. They got wheat from ration shops, but due to the closure of the flour mill given the lockdown, they could not convert the wheat into flour. In such a situation, the decision to distribute flour instead of wheat will solve this problem as it is difficult to predict the end of this pandemic. This scheme will also protect people from the virus and reduce the risk of spreading the infection. It is not possible to enforce social distancing at FPS shops located in congested areas. Therefore, it is imperative that NFSA beneficiaries are given ration at their doorstep.

The CM further said that it is being reported that children may be affected more during the potential third wave of Corona. Forcing parents and guardians to visit FPS shops during this time may expose children to the virus and consequently make children more vulnerable. There is a possibility of a third wave coming, yet most of the population in the country has not been vaccinated and the country is also facing the problem of adequate availability of vaccines. Hence, it is necessary that public services be delivered to the people at home until a sufficient number of people are vaccinated.

With the implementation of this scheme, the NFSA beneficiaries who are unable to visit the FPS shops like old/disabled, handicapped, pregnant women, or nursing mothers, etc. will get a hassle-free facility. If a state government wants to give the benefit of home delivery to its entire population, then why will the central government object? Secondly, after its implementation, the problem of ration theft, adulteration, and black marketing, etc. will end.

Salient Features of Doorstep Delivery of Ration under NFSA Scheme

The sole objective of this scheme is to ensure the delivery of wheat flour, clean rice, and sugar at the doorstep of the beneficiaries, which will be done under the supervision of the Delhi State Civil Supplies Corporation (DSCSC). Its features are as follows-

1. Processing and Transportation for FPS: Under the first phase, food grains will be lifted from FCI godowns, and as per FSSAI, wheat will be converted into flour; clean rice and sugar will also be packed. Thereafter, the agency will reach the fair price shops run by the Delhi Consumer Cooperative Wholesale Stores (DCCWS).

2. Doorstep Delivery: Under the second phase, other empaneled agencies will deliver the packaged ration to the homes of the beneficiaries who opt for doorstep delivery. The transportation cost or the cost of cleaning and grinding damages will not be paid by the beneficiary. They will only be charged a conversion fee of Rs 2 per kg for converting the wheat to flour. The ration will be given to the beneficiary only after matching the biometrics through the Packed Ration e-POS machine.

3. There is also a plan to set up a call center to address the grievances of the people. The empaneled agency will also run a beneficiary outreach program for making home deliveries. Every level of the programme will be closely monitored to ensure transparency and prevent theft and other problems. The entire operations, from FCI godowns to lifting, milling, packaging to delivery will be done under CCTV surveillance and will be transported in GPS fitted vehicles.

1. Under Section 24(2)(b) of NFSA, it is the responsibility of the State Governments to ensure proper distribution of ration to the eligible beneficiaries.

2. Therefore, the State Governments are also empowered under section 12(1) to reform the Targeted Public Distribution System, including the introduction of new schemes to ensure that ration reaches the eligible beneficiaries properly. It is also clear from the order dated 01 February 2018 of the Central Government that the Doorstep Delivery Scheme secures the entitlement of the beneficiaries.

3. In addition, Section 3(3) of the Act also explicitly permits the State Governments to provide wheat flour in lieu of food grains as per the guidelines of the Central Government. The scheme charges only for the conversion of wheat to flour in the manner provided by the central government, and not for any other service like cleaning, packaging, or transportation.

Orissa and Andhra Pradesh have already modelled doorstep delivery, while home delivery of ration has been started in Faridabad, Haryana. Also, flour is being distributed in Ambala and Karnal.