Thirteen precious red sandalwood logs were seized from their possession along with the vehicle at the Alipiri toll gate early morning. 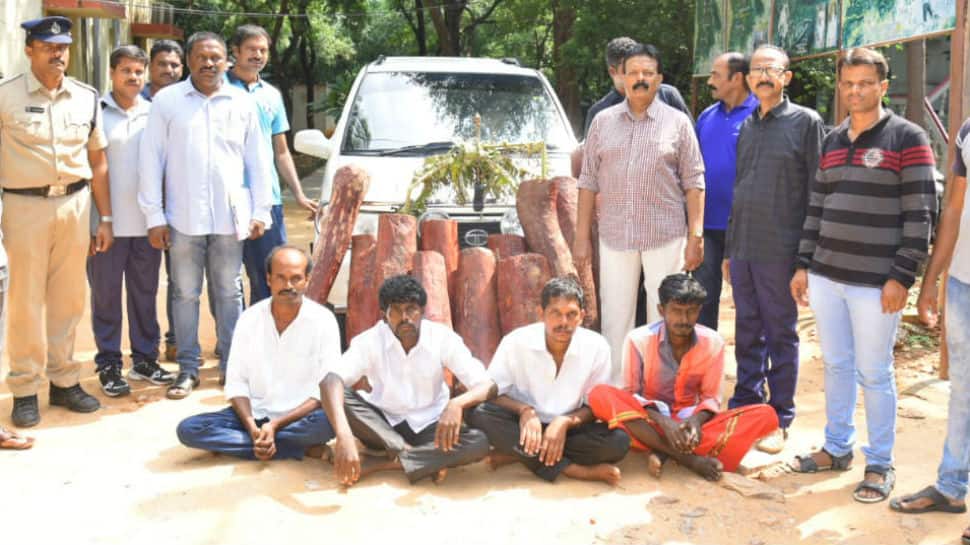 Thirteen precious red sandalwood logs were seized from their possession along with the vehicle at the Alipiri toll gate early morning.

It was a fifth attempt in smuggling the sandalwood on the same vehicle. On the previous occasions, the smugglers made four trips to Brahmotsavams - the busiest period in Tirumala Hills - during which they were able to smuggle the red sandalwood logs. Cutting and transporting the precious red sandalwood trees are banned in Andhra Pradesh.

"Today at around 3.30 am, we got a tip-off that smuggling of red sandalwood is taking place. The vehicle was decked like tourists and devotees vehicle. We intercepted this vehicle near Alipiri toll gate and arrested this four smugglers along with 13 logs of precious sandalwood,'' Ravi Shankar, SP, Task Force told Zee News.

What baffled the task force personnel was the way these smugglers were able to smuggle out red sandalwood logs on four occasions during the recent Brahmotsavams.

Every year, Brahmotsavams are held during Navaratri and the pilgrims come in large number to pray.

"When we arrested these four people and did our preliminary investigation, we came to know that the same vehicle (TN 07 AL 3903) was used for smuggling. On all the earlier four occasions, they could smuggle out the red sandalwood without being detected but this time they were unlucky,'' adds Ravi Shankar, SP, Task Force.

Red sandalwood smuggling is a big menace since last many decades in Andhra Pradesh. This precious wood, which is found in Chittoor district, including Tirumala and Tirupati, is in huge demand, especially from other Asian countries.

Government has nothing to do with PMC bank scam, RBI will take action: FM Nirmala Sitharaman