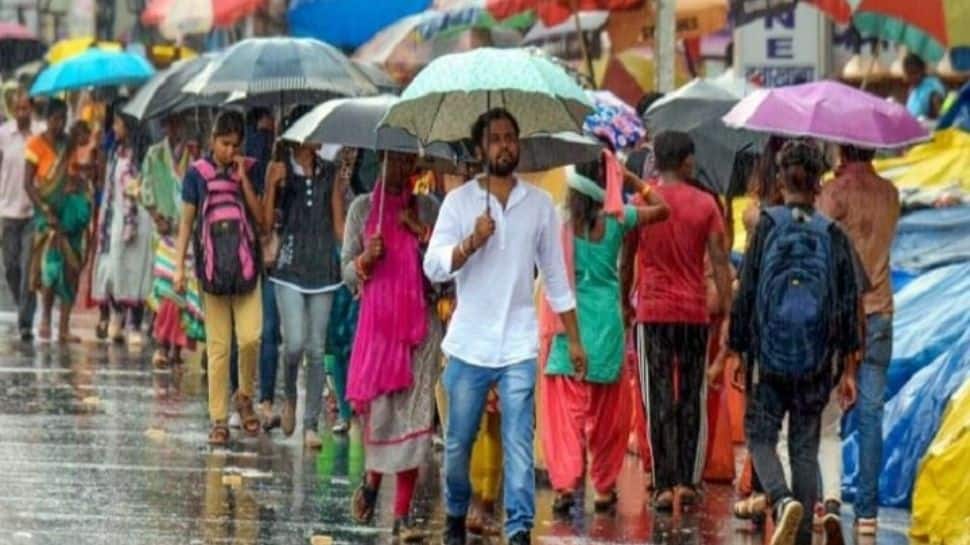 New Delhi: Heavy rains on Monday (October 18, 2021) lashed several parts of north India, including Uttarakhand, where three people were killed in a rain-related incident, while a red alert for 10 dams was issued in Kerala due to incessant downpour in the southern state.

In Delhi, the month of October this year has been the wettest since 1960, when the city had recorded 93.4 mm of rainfall, according to data shared by the India Meteorological Department (IMD).

Due to heavy downpour, Madhya Pradesh Chief Minister Shivraj Singh Chouhan postponed his campaign tour to Khandwa for the upcoming Lok Sabha bypoll there, while in Uttar Pradesh, Samajwadi Party chief Akhilesh Yadav's rally had to be cancelled in Budhana town as the venue was submerged in rainwater.

Authorities in Uttarakhand, where three labourers from Nepal died and two others were injured, advised Chardham pilgrims who arrived in Haridwar and Rishikesh by Sunday not to proceed to the Himalayan temples till the weather improves.

The labourers were staying in a tent at Samkhal near Lansdowne in Pauri district when rubble flowing down from a field above due to the rains buried them alive, District Magistrate Vijay Kumar Jogdande said, adding that the injured were admitted to the Kotdwar base hospital.

Passenger vehicles are not being allowed to cross the Chandrabhaga bridge, Tapovan, Lakshman Jhoola and Muni-ki-Reti Bhadrakali barriers in Rishikesh.

In Kerala, where heavy rains have claimed 22 lives till Sunday, water levels are rising in the catchment areas.

A red alert was issued in respect of 10 dams in Kerala, two shutters of Kakki dam in Pathanamthitta were opened and pilgrimage to Lord Ayyappa temple in Sabarimala has been put on hold for now, state Revenue Minister K Rajan said.

After a review meeting held at the Pathanamthitta district collectorate to assess the situation, Rajan and state Health Minister Veena George said that it has been decided to open the Kakki dam to release around 100-200 cumex water, which would increase the water level of Pampa river by around 15 centimetres.

They said the decision was taken in view of the water level in the dam increasing beyond the danger levels and also taking into consideration the heavy rains expected from October 20, which might worsen the situation if some water is not released now.

In view of the expected worsening of the weather from October 20 till 24, according to IMD information, they said it would not be possible to permit pilgrimage to the Lord Ayyappa temple at Sabarimala for the Thula Masam poojas for which the shrine had been opened from October 16.

Heavy rains lashed Delhi, leading to traffic snarls and waterlogging at several places in the city. The minimum temperature settled at 20.1 degrees Celsius, two notches above the season's average.

In the national capital this year, 94.6 mm of rainfall has already been recorded in October.

On Sunday, Delhi recorded 87.9 mm of rainfall, the fourth highest in a day, according to data.

In Madhya Pradesh, almost the entire state received post-monsoon showers in the 24-hour period ending at 8.30 am.

More rains are likely over the next couple of days in the state, P K Saha, senior meteorologist at the India Meteorological Department's (IMD) Bhopal office, told PTI.

Chief Minister Chouhan postponed his Monday visit to Khandwa due to the inclement weather, an official from Chief Minister's Office said, adding that the overnight rains caused slush at the venue where Chouhan was supposed to address public meetings.

Incessant rains with one or two spells of heavy downpour caused by a low pressure system affected normal life in several parts of West Bengal, including Kolkata.

The Meteorological (MeT) Department has forecast heavy rainfall in all the districts of south Bengal, where inclement weather prevailed on Monday and Tuesday.

In Uttar Pradesh, districts like Muzaffarnagar, Shamli, Baghpat and Meerut have received heavy rainfall since Sunday morning, which has led to waterlogging and electricity supply disruption in several parts of these districts.

Highest of 158 mm rainfall occurred in Baran district's Kishanganj area, followed by Sapotra in Karauli, where 130 mm was recorded till Monday morning since Sunday, it said.

Odisha braced for heavy rain as a low-pressure area (Lopar) formed over the Gangetic West Bengal.

Fisherfolk have been advised not to venture into deep sea off the Odisha coast till Tuesday as squally weather with wind speed of 40-50 kmph and gusting up to 60 kmph is likely over north Bay of Bengal.

It issued an orange alert of heavy to very heavy rainfall at one or two places over Balasore and Mayurbhanj districts till 8.30 am of Tuesday.

Kerala couple wades through floodwater in improvised vessel to get married, watch video