India should be wary of China's 'String of Pearls strategy' to encircle India: Experts

China has undertaken a strong ‘colonial enterprise’ with a mix of employing ‘debt-trap diplomacy’ and ‘wolf-warrior diplomacy’. 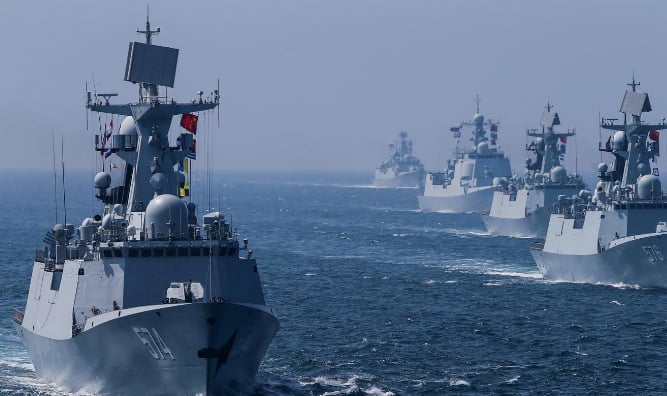 New Delhi: China's aggressive actions against India at the Line of Actual Control (LAC) earlier this year resulted in an ongoing standoff between the two Asian giants. At the same time, China's increasing belligerence towards the United States and Australia, and other neighbours, has led to global concern for the Communist nation's ambitions for the world order.

With a mix of employing ‘debt-trap diplomacy’ and ‘wolf-warrior diplomacy’, China has undertaken a strong ‘colonial enterprise’. In light of such actions, calls have been made in India across the aisle for it to decouple from China, with the government already has taken steps in that direction.

Participating in a webinar organized by Delhi-based international affairs observer group Red Lantern Analytica (RLA) on the topic ‘Why India Needs to Decouple from China: Understanding China’s Colonial Enterprise’  Member of Parliament from Biju Janata Dal Dr Amar Patnaik stressed the need for a ‘quest for excellence’ as India plans to decouple from China. He argued that even though decoupling is the need of the hour, the path is difficult – which requires a complete overhaul of the manufacturing ecosystem of the country.

India needs to enlarge its GDP and tap into the large market to be able to produce cost-competitive products that can rival China’s, and hence, develop its global supply chains. At present, most of the materials India requires for its major projects and initiatives must be sourced from China. That is why the economic decoupling with China cannot be like a turn-on and turn-off approach.

“A few things India must be aware of in its efforts to establish end-to-end supply chains and it cannot run into the same problems plaguing China. It cannot have low wages for workers or mass produce non-essential goods that would later be dumped in other economies. Decoupling is, therefore, necessary but it is a difficult proposition. India needs to grow at 8% for the next few years to be able to successfully decouple from China. It’s a tall order but India is heading in the right direction”, said  Dr Amar Patnaik.

China expert and activist Kyle Olbert highlighted that the need for decoupling emerges due to the strategic concerns that India has against China. He observed that China is following Alfred Thayar’s strategy of “who controls the seas” and that India should be wary of China’s naval network and the String of Pearls strategy to encircle India. He further noted that China being an authoritarian state has a disregard for human rights like the right to privacy and therefore, India should not allow Chinese companies to access its data at any cost.

“India’s hopes until recently lied with the Port of Chabahar located in Iran. India had hoped that India, Afghanistan, and Iran would develop the Chabahar Port and built an economic corridor. But China intends to use the port of Gwadar in ‘Occupied Balochistan’ to project its military power across the Chabahar Port. China has also recently signed a major deal with Iran. This further dashed India’s hope for an economic corridor.

In its attempts to box India, China has turned ‘Occupied East Turkistan’ into a ‘Gulag’ comprising multiple labour camps, prisons, and concentration camps. This process is likely to repeat itself wherever China goes because the Chinese Communist Party (CCP), by nature, is an authoritarian and totalitarian regime. There is not only a military imperative for India but also a human rights imperative to decouple from China,” said Kyle Olbert.

Senior fellow at Institute of Peace and Conflict Studies Abhijit Iyer Mitra argued that technically, the conversation of decoupling starts in the West. China only accounts for 0.9% of inwards investment into the US and 3% of inwards investment into the EU. China’s trade with the US and EU combined equals the amount of trade carried out between the US and EU. In terms of trade flows, China is important to the West. But in terms of investment flows, it is not! This is the starting point for a Western decoupling from China. The West is the technology supplier to China, either it is legal technology transfer, like Apple setting up a factory in China, or it is stolen technology which China is extremely good at.

“India has to rapidly move into mid-level manufacturing if it wishes to replace China. The basic problems in India that make it unappealing for businesses are - an educational deficit (not spending enough on education), riots are very frequent and so are law and order situations. There is also a highly volatile law and order ecosystem, a volatile jurisprudence ecosystem, an enforcement deficit in past laws and atrocious regulations,” said Abhijit Iyer Mitra.

Professor of Economics at Christ University Dr Shalini Sharma, argued that even though the path of decoupling is a difficult one, India is well on its way to achieving success in it. She pointed out various successes of the government policies and projects like Make in India and Atma Nirbhar Bharat, which have given a huge impetus to startups in India. India is also attracting global value chains and that the Foreign Direct Investment (FDI) inflows have increased in recent times as a result of these policies.

“In 1989, maximum imports into India were from the US, followed by the UK. In 1999, the structure changed slightly but China was not visible at all in the top 5 countries. By this time, India was not dependent on China. All that changed in 2009 as Indian imports from China grew to 11% and in 2019, Chinese import became 13% and was almost reaching 15% by the end of the year. On the export side, India’s basic exports were with the Soviet Union and in 1999, India began exporting to the United States. In the same year, 6% of India’s exports were going to China, while India’s imports from China were negligible. In 2009, India’s exports to China fell from 6% to 5% and in 2019, the exports to China further fell, leading to the growing trade deficit between India and China. the current world perspective on China and burgeoning anti-China sentiments across the world will help India and has already dealt a huge economic blow to China,” said Dr Shalini Sharma.

Dr Pradeep Kumar said, “Trade between India and China is high but in terms of imports and exports, there is a deficit and India is not yet competitive in relation to Chinese goods. India has to take a hard stand against China in terms of the military as well as in the economic sphere. Taking a hard stance against China on the border but continuing economic dependence on China sends a very wishy-washy statement.”

RLA's founder Abhishek Ranjan moderated the webinar and referred to the need to address the ‘dragon in the room’ as India looks towards decoupling from China.