Prime Minister Narendra Modi will dedicate to the nation the India's longest road tunnel on Sunday. It is built on the Jammu-Srinagar National Highway. 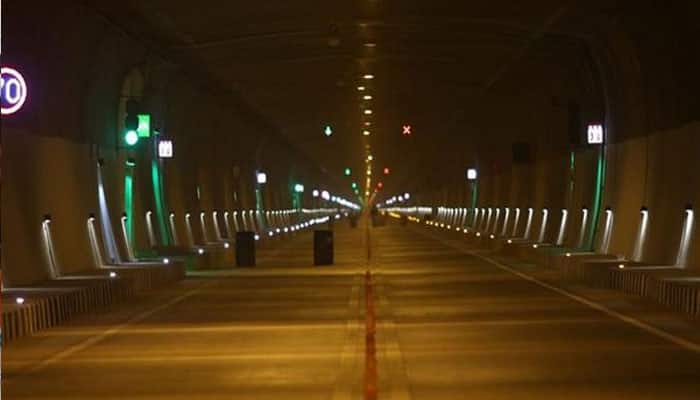 Jammu: Prime Minister Narendra Modi will dedicate to the nation the India's longest road tunnel on Sunday. It is built on the Jammu-Srinagar National Highway.

The name of the tunnel is Chenani-Nashri tunnel.

Here are 10 MUST KNOW facts about India's longest road tunnel:-

2- The tunnel, which is located at an elevation of 1200 meters, will be the first in India to be equipped with world class "integrated tunnel control system" through which ventilation, fire control, signals, communication and electrical systems will be automatically actuated.

3- It will reduce the travel time between the two state capitals of Jammu and Srinagar by two-and-a-half hours.

4- The road distance from Chenani and Nashri will now be 10.9 km, instead of the existing 41 km.

5- Once the tunnel becomes operational, it will reduce the traffic jams on National Highway-1A that occur due to snowfall and avalanches in winter at Patnitop

7- The formal trial run of this India's longest road tunnel was successfully completed for peak, off peak hours between March 9 and March 15

8- Travel will cost an LMV vehicle Rs 55 on one side and Rs 85 for to-and-fro journey and Rs 1,870 for one month travel, while bigger vehicles like mini buses will have pay Rs 90 as one side toll and Rs 135 for to-and-fro toll.

10-  Infrastructure Leasing and Financial Services (IL&FS) Company has setup a well-equipped fully computerised operation room for surveillance of vehicles inside the twin tubes.

Congress adamant on no EVMs, questions 'compulsion' of using them