Pakistan-trained terrorists caused "ISIS-level of horror and brutality" in Jammu and Kashmir long before the West was “even apprised of the brutalities of radical Islamic terror", said Indian columnist Sunanda Vashisht at a US Congressional hearing on Human Rights in Washington on Thursday. 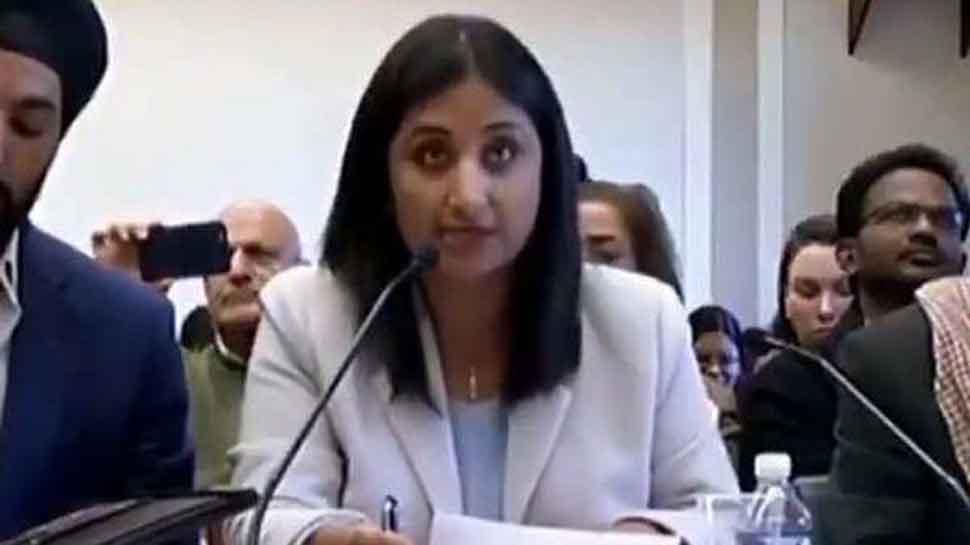 NEW DELHI: Pakistan-trained terrorists caused "ISIS-level of horror and brutality" in Jammu and Kashmir long before the West was “even apprised of the brutalities of radical Islamic terror", said Indian columnist Sunanda Vashisht at a US Congressional hearing on Human Rights in Washington on Thursday.

Her testimony, delivered at Tom Lantos Human Rights Commission, took social media by storm in which she recounted the horrors suffered by Kashmiri Hindus in 1990.

India has "not occupied" Kashmir and Kashmir was always an integral part of India, she said. "India is not just a 70-year-old identity, but a 5000-year-old civilisation. There is no India without Kashmir, and no Kashmir without India."

She described the abrogation of the provisions of Article 370, which gave special status to Jammu and Kashmir, as restoration of human rights.

Here is the full text of her speech dismantling the false narrative against Kashmir:

I would like to thank the Tom Lantos Human Rights Commission for allowing me to testify here as a witness today. It is worth remembering that this Commission is named after the late Congressman Tom Lantos, a Hungarian-born Holocaust survivor. In July 2003, Congressman Lantos had voiced the concerns of the Indian-American and American-Jewish community to hold Pakistan accountable on its export of radical Islamic terrorism and said, “Indians and Jews share a passionate commitment to respect for others, for the rule of law and for democracy, and lately we have been drawn together by our joint fight against mindless, vicious, fanatic Islamic terrorism.” The bloodied trails of radical Islamic terrorism that he foresaw and sought to stench have claimed many more lives since then, including that of the American journalist Daniel Pearl. Daniel Pearl was kidnapped and beheaded by Pakistani terrorists. Honourable Members of the Tom Lantos Commission, I speak before you the last words of Daniel Pearl’s, “My father's Jewish, my mother's Jewish, I'm Jewish.”

Honourable Members of the Tom Lantos Commission, I now speak before you the last words of Daniel Pearl in my own words, my father’s Kashmiri-Hindu, my mother’s Kashmiri-Hindu, I am Kashmiri-Hindu and our home and lives in Kashmir were destroyed by radical Islamic terrorism exported by Pakistan. As I begin to speak, I am choked by the thoughts of those whose voices I represent here because their voices were extinguished in the most brutal fashion. I am a member of the minority Hindu community from Kashmir valley in India, the victim of the worst ethnic cleansing witnessed in independent India. I speak here today because I am a survivor.

An innocent young woman, a lab assistant in a school, wasn’t as lucky as I was. She was abducted, blindfolded, gang-raped and she was cut into two halves on a mechanical saw. Her name was Girija Tickoo. Her only crime - her faith. I am her voice today. I am also the voice of a young Kashmir Hindu engineer who was hunted by terrorists, again for his faith alone. When terrorists came to kill him in his home, he hid in a huge rice container in his attic. He would have been alive today had he not trusted his neighbours, who disclosed his hiding location. The terrorist shot him through the container and forced his wife to eat the blood-soaked rice. His name was BK Ganjoo. His crime- faith, I speak for him today. I have seen ISIS-level of horror and brutality in Kashmir, 30 years before the West was even introduced to the brutalities of radical Islamist terror.

I am glad these hearings are happening today because when my family and I lost our homes, our livelihood, and our way of life the world remained silent. Where were the advocates of human rights when my rights were taken away? Where was the human rights congressional committee on the night of 19th January 1990, when there were voices blaring from all mosques in the valley that they wanted Kashmir with Hindu women but without Hindu men? Where were the saviours of humanity when my feeble, old grandfather stood with two kitchen knives and an old rusted axe ready to kill my mother and me in order to save us from the much worse fate that awaited us if we landed in the hands of terrorists on the same fateful night. My people were told to flee, convert or die. Around 4,00,000 Kashmiris Hindus fled right after that night of horror. They were lucky. Those who couldn’t be killed.

Today, 30 years later, I am still not welcome in my home in Kashmir. I am not allowed to follow my faith without fear as those countless others in my community. My house in Kashmir is illegally occupied as are the houses of my relatives. Those that are not occupied have mostly been burnt down. Thousands of our temples have been vandalised and lay in ruins. Every effort has been made to eradicate Hinduism from Kashmir. Today Kashmir is home to only one religion. This is by design and this is the ultimate violation of human rights. Diversity and acceptance of different views are not the norms in today's Kashmir. In Kashmir, these very basic tenets have been uprooted and this has still not changed. Its not just my community, Sikhs have been massacred. In January 2012, a fatwa was announced against Christian schools in Kashmir for "luring Muslims to Christianity". What human rights are we talking about when all minorities have either been driven out or silenced? An Islamist state of Kashmir where other religions will not be welcome and tolerance of any other viewpoint will be absent is no citadel of human rights. This is the society that is being created in Kashmir by those who are talking about human rights.

The Right to Life is the most fundamental human right, all other rights flow from it. And terrorism is the ultimate opponent of human rights. Human rights cannot take precedence over human life. Everyone who stands for freedom, liberty and right to life should worry about radicalisation that fuels terror. A 65-year-old shopkeeper, Ghulam Mohammad Mir who gets killed by the terrorists because he opened his shop to earn his livelihood does not care about the internet or phone connection. Truck drivers and apple traders are shot dead by terrorists for simply wanting to earn their livelihood. The simple act of earning livelihood in Kashmir today is prohibited by terrorists because earning a livelihood would show that Kashmir is moving towards normalcy. I want to ask you who are these people who fear normalcy in Kashmir? Who are these people who talk about human rights but fear-free movement, free thought and right to earn a livelihood?

Abrogation of Article 370 that has raised so much of concern around the world is, in fact, a restoration of human rights. The Indian Constitution that is modelled on the US Constitution is the most liberal document in the world. This Constitution was not applicable to J&K in totality as long as the temporary provision of article 370 was in force. After the abrogation of Article 370,  people of Jammu and Ladakh are liberated to be called citizens in their own country. Kashmiri women and the LGBTQ community in Kashmir have been given the same rights as other Indian citizens.  Practices like child marriage that gave way to child trafficking and sex trafficking have been absolved. As a mother and as a woman, this has been very important to me that child marriage has now been outlawed in Kashmir.

Today, I am delighted that Kashmiris have the same rights as Indian citizens. If something as serious as a woman’s right to own property and granting of LGBTQ rights amongst many others, has been accomplished through abrogation of article 370, then it is safe to assume that restoration of Internet and phone service in few remaining districts of Kashmir is not too far away.

I am a proud daughter of Kashmir. I am proud legality of India's civilisation. Terrorism has uprooted me and snatched my home from me. I hope my human rights are restored too someday.”

How do people breathe? Supreme Court asks Delhi govt, tells Odd-Even may not be permanent solution to curb pollution