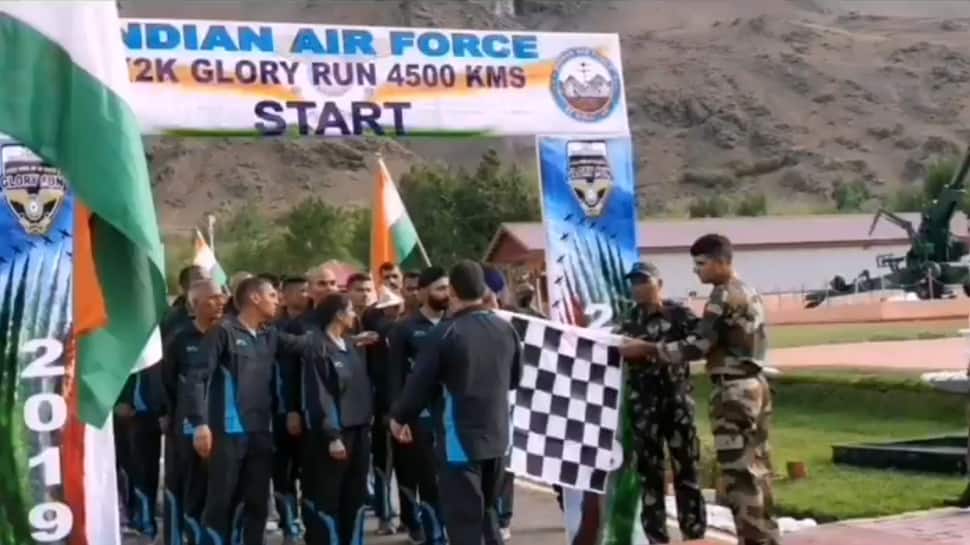 The Kargil to Kohima (K2K) Ultra-Marathon- “Glory Run” is being undertaken by IAF from Kargil War Memorial, Drass (J&K) to Kohima War Cemetery, Kohima (Nagaland) to commemorate 20th year of Kargil Victory and to live up to the true tradition and motto of IAF i.e. “Touch the Sky with Glory”, a unique expedition. It is to be noted that Kohima and Kargil are the two forward most outposts of India in the East and in the North.

20 years of #KargilVictory: To commemorate 20th year of Kargil Victory & to live up to the true tradition & motto of IAF i.e. “Touch the Sky with Glory”, a unique expedition from Kargil to Kohima (K2K) Ultra-Marathon- “Glory Run” is being undertaken by the IAF.@SpokespersonMoD pic.twitter.com/gFtDFGXRcW

K2K – Glory Run is set to end on November 6, 2019 and during the course of marathon a team of 25 Air Warriors will cover a distance of more than 4500 Km in 45 days by running an average of 100 Km per day. The aim of the expedition is to promote awareness for Pedestrian Safety and recently launched Fit India Movement by Prime Minister Narendra Modi. The expedition is also launched with an aim to pay tribute to the brave hearts who have made the supreme sacrifice for our motherland.

On September 6, 2019, Air Chief Marshal BS Dhanoa, Chairman Chiefs of Staff Committee & Chief of the Air Staff handed over the ‘Glory Torch’ to the team leader Squadron Leader Suresh Razdan at Air Headquarters (VayuBhavan), New Delhi. The members of team have been selected after rigorous selection trials and has undergone strenuous training at Air Force Station Leh to undertake the Ultra-Marathon.

The team consists of officers and airmen including one female officer Flight Lieutenant Rishab Jeet Kaurand Warrant Officer Indra Pal Singh, who is 51-year-old. Squadron Leader Suresh Razdan who is a Su-30 aircraft pilot is leading the expedition. The team will be following Drass – Leh- Manali Highway where average elevation is 13,000 feet with its highest elevation being 17480 ft at Tanglang-La mountain pass. The team will be crossing many small streams of ice–cold water from snow capped mountains which demands audacious attitude to negotiate the treacherous mountainous terrain. Some of the passes in Ladakh region are Namiki–La (12198 ft), Fout–La (13510 ft), Tanglang–La (17480 ft), Lachung–La (16613 ft), Baralancha–La (16040 ft) and Rohtang (13129 ft).

During the expedition, the team will do camping and live outdoors, manage and survive in snow, rain and extreme climate through varied terrain of Ladakh, Himachal Pradesh, Punjab, Uttarakhand, Uttar Pradesh, Bihar, West Bengal, Assam and Nagaland.