After days of continuous heavy rainfall battering Kerala, the intensity of rain is likely to reduce even as death toll due to flood-related incidents mounted to 76 on Monday. 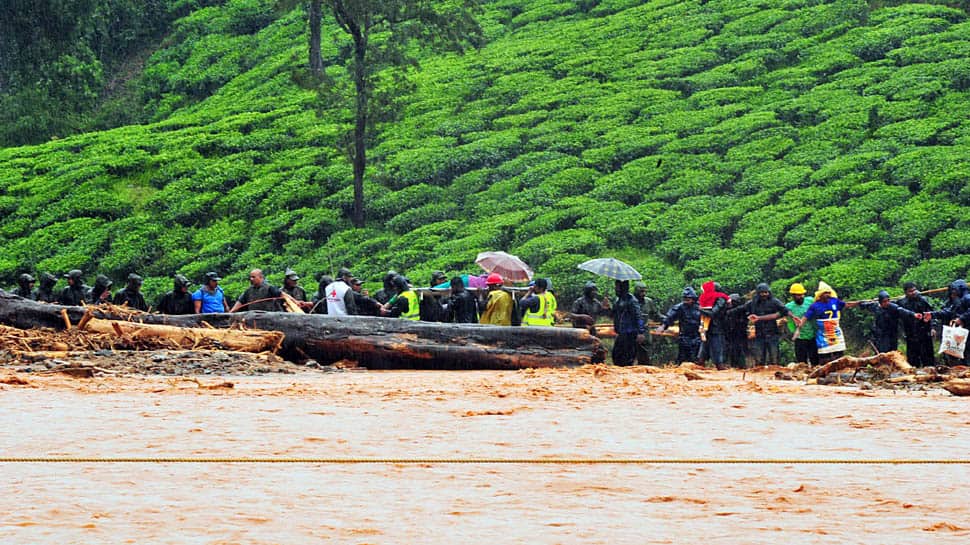 Thiruvananthpuram: After days of continuous heavy rainfall battering Kerala, the intensity of rain is likely to reduce even as death toll due to flood-related incidents mounted to 76 on Monday.

For the first time in many days, the Indian Meteorological Department (IMD) did not issue a red alert in any of the districts of Kerala while an orange alert, detonating the likelihood of heavy to very rainfall,  has been sounded in two of its districts; Alappuzha and Ernakulam.

Kerala State Disaster Management Authority (KSDMA) said that while 76 people have died, 58 were missing and 32 injured due to flood-related incidents across the state, between August 8 and August 11. Around 2.5 lakh people have shifted to over 1,500 relief camps that have been set in districts across the state.

Meanwhile, Congress leader Rahul Gandhi, who has been camping since Sunday in his constituency and one of the worst-affected district Wayanad, visited the areas devastated by the floods and distributed provisions to people in relief camps.

Addressing the people at a relief camp in Kaithapoyil, Wayanad, Rahul said, "As your MP, I called CM and requested him to help here as aggressively as possible. I also called the Prime Minister and explained to him the tragedy that has taken place here and the need for support from the centre."

Taking to Facebook, Rahul also appealed to people for help in providing relief material to those hit by the floods.

"My Parliamentary constituency Wayanad has been devastated by floods with thousands left homeless and shifted to relief camps," Rahul said while listing out the essential items which could be donated to help those in need.

In Karnataka, at least 40 people have lost their lives since August 1 while 14 others are reported to be missing. More than 5 lakh people have been evacuated to safety as over 1100 relief camps across the state have been providing aid and assistance to flood-affected people. The state is witnessing the fury of monsoon as relentless rain has caused massive damage to around17 districts and 2028 villages.

On Monday, Karnataka State Natural Disaster Monitoring Centre said that Belagavi district is most likely to receive scattered to fairly widespread with moderate rain for the next five days.

Karnataka Chief Minister BS Yediyurappa visited rain and flood-affected areas of the state. The CM had categorised the floods as the worst-ever in 45 years and had asked for immediate help from the central government.

News agency ANI reported that the water levels have started receding in North Karnataka after the rains subsided. The situation was under control and Army teams might be heading back soon.

In Maharashtra, the death toll in Sangli district, one of the worst-affected regions in Maharashtra, was reported to be 17 till Sunday. More than four lakh people were evacuated from flood-affected parts of the state as more than five lakh cusec of water was discharged from Almatti dam on the Krishna river in Karnataka to ease the flood situation.