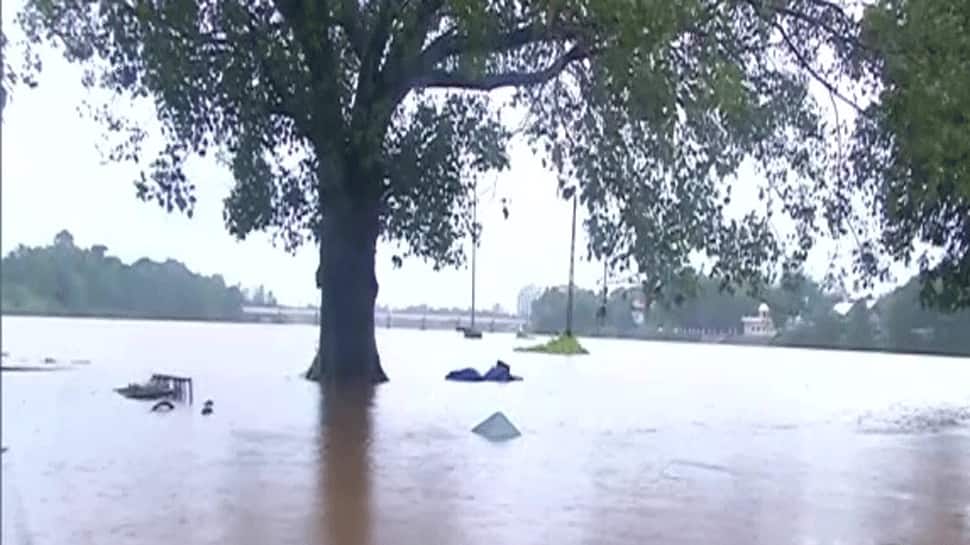 Pathanamthitta: The India Meteorological Department (IMD) has issued an orange alert in Kerala`s Pathanamthitta district as the water level in Pamba dam is rose to  983.05 meters. However, the level is likely to increase further to 983.50 meters within an hour.

Once the water level crosses 984.5 meters mark red alert will be declared. The Pathanamthitta District Collector said, "The water level in Pamba dam is 983.05 meters now and is likely to reach 983.50 meters within an hour. So, the second alert- orange alert has been issued. A red alert will be declared at 984.5 meters and dam will open when it reaches 985 meters." said Pathanamthitta District Collector.

Meanwhile, a portion of the Shiva Temple in Aluva continues to remain submerged. However, the water level in the Periyar River is receding gradually and more part of the temple is above the water level now.

On Friday, the India Meteorological Department (IMD) had issued a red alert in Kozhikode district. It had also predicted rainfall in different parts of the state.

Due to heavy downpour, a massive landslide had occurred in Idukki district recently. The death toll in Idukki landslide has risen to 26, Kerala Chief Minister Pinarayi Vijayan said on Saturday.The Chief Minister said that monsoon fury continues to be severe in the state.

In the wake of rising water level the Kerala government Saturday asked the Tamil Nadu government to release water from Mullaperiyar through the tunnel to Vaigai Dam in a phased manner when the water level reaches 136 feet.

"The state is receiving heavy rains, especially in the Idukki district. The water level in the catchment area of Mullaperiyar has been steadily rising. The water level, which was at 116.20 feet on August 3 is up to 131.25 feet by 2 pm on August 7," Kerala Chief Secretary Vishwas Mehta said in his letter.