After two days of incessant rainfall which threw normal life out of gear, Mumbai is all set to receive another bout of heavy rainfall on Sunday. A red alert has been issued by the Indian Meteorological Department (IMD) for Sunday, signifying further spell of downpour in Mumbai, Palghar, Thane, and Raigad districts of Maharashtra for July 27 to July 28. 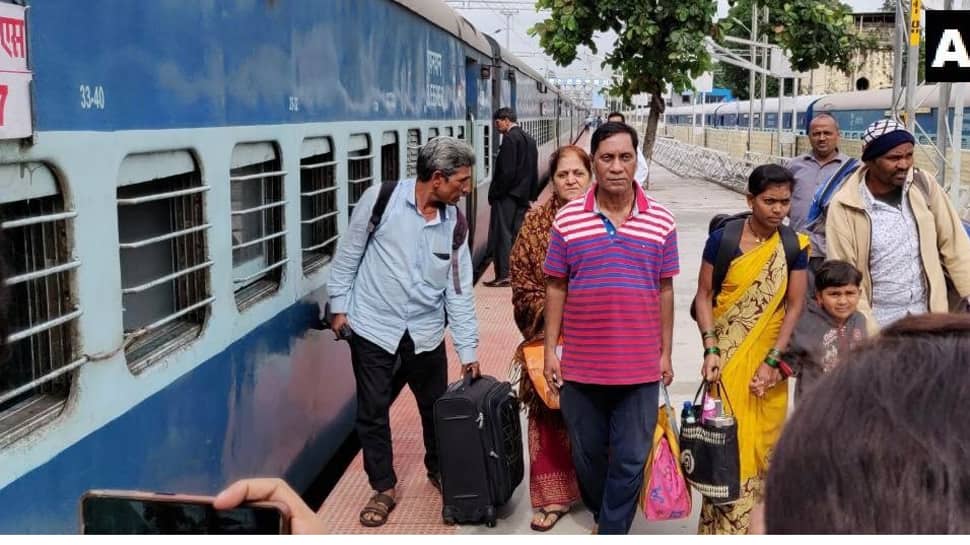 MUMBAI: After two days of incessant rainfall which threw normal life out of gear, Mumbai city is preparing itself to receive another bout of heavy rainfall on Sunday. A red alert has been issued by the Indian Meteorological Department (IMD) for Sunday, signifying further spell of heavy downpour in Mumbai, Palghar, Thane, and Raigad districts of Maharashtra for July 27 to July 28. This weather alert denotes the possibility of ''very heavy to extremely heavy rainfall''.

The Disaster Cell of Brihanmumbai Municipal Corporation (BMC) has been put on alert as high tide was predicted in the morning along the Mumbai coast on Sunday. Waves as high as 3.60 metre could rise in the Arabian Sea, the IMD said in its warning. People have been requested not to venture along the coastline during the high tide. Fishermen have also been warned not to enter the sea due to the continuous downpour.

The BMC has also issued an emergency helpline number 1916 for disaster response. Due to the heavy rains, the admission process for medical and engineering colleges in the state has been postponed by two days.

However, local train services on Western Railways are likely to remain unaffected and run smoothly on Sunday. The area surrounding Badlapur-Karjat-Kasara railway stations is still heavily waterlogged due to the torrential rain happening for the past 48 hours. Therefore, the area beyond Kalyan will be unserviceable on the Central line on Sunday.

Traffic congestion in various parts of the city is expected due to the rains. Goa-Mumbai highway which was shut on Saturday due to a landslide near Parshuram Ghat and overflowing of Jagbudi River in Ratnagiri district will remain closed on Sunday as well.

The Chhatrapati Shivaji International Airport in Mumbai has taken extensive precautionary measures to deal with incessant rains. All the drain blocks near the airport are being checked for leakages by the concerned authorities.

Ready to eat items, drinking water to be distributed among passengers, toiletries, dental kit, rainwear, gumboots, inflatable jackets have been stored. Standby duties for ground staff have been marked in the roster as monsoon contingency in case waterlogging is reported.

Log in to Zee News for latest updates on the situation in Mumbai and adjoining areas:-

All the passengers who were rescued from Mahalaxmi Express on Saturday have been brought to Kolhapur via 19-coach special train, news agency ANI reported.

Maharashtra: All the passengers of #MahalaxmiExpress have been brought to Kolhapur via a special train. pic.twitter.com/GusSw3rHGI

Bollywood superstar Amitabh Bachchan has praised the NDRF, Navy, Army, Railways and the state administration for successfully rescuing 700 passengers from the Mahalaxmi Express, which was stuck due to heavy rainfall on Saturday with nearly 2000 passengers onboard.

T 3239 - Congratulations to the NDRF team .. they have successfully rescued 700 passengers from the Mahalaxmi Express .. !! Well done NDRF, Navy, IAF, Railways & State Admin ..THIS IS A BRAVE AND SUCCESSful OPERATION !! filled with pride ..JAI HIND !!

4 teams of NDRF are on standby and alert in Thane as the IMD has predicted rainfall on Sunday.

The National Disaster Response Force and the Western Naval Command rescued all 1,050 passengers stranded on the long-distance Mahalaxmi Express near Badlapur in Thane after the railway tracks were flooded following heavy rainfall. The passengers later left from Kalyan to Kolhapur on a special 19-coach train. Of these, the NDRF rescued 550 passengers.

Weather agency Skymet says there will be a marginal relief from rains during the next 24 hours in Mumbai.

The IMD has predicted that places over Konkan, Goa and Gujarat are likely to receive heavy rainfall on Sunday. The weather forecasting agency also predicted heavy downpour over Madhya Maharashtra and East Rajasthan, Chhattisgarh and West Rajasthan later in the day.

Traffic resumed at Pen-Khopoli highway after police removed fallen trees from the highway. The work was carried out in the night with the help of the JCB machine. Now the traffic is smooth there: Raigad Police.

According to Maharashtra Higher Education Minister Vinod Tawde, the time for reporting for Round 2 of the `Centralised Admission Process' (CAP) for engineering courses has been extended by two days till July 29 due to the heavy rains.

SpiceJet has informed that ''due to bad weather at Mumbai (BOM), all departures/arrivals and their consequential flights might get affected. The passengers are requested to keep a check on their flight status via https://bit.ly/2GB1ork.''

#WeatherUpdate Due to bad weather at Mumbai (BOM), all departures/arrivals and their consequential flights might get affected. The passengers are requested to keep a check on their flight status via https://t.co/JQlVDMTsWi

In view of the incessant rainfall, the Mumbai-Goa national highway in Maharashtra remains shut for traffic since Saturday morning as river Jagbudi of coastal Ratnagiri district is flooded.

The BMC has also issued an emergency helpline number 1916 for disaster response.

BMC has alerted its citizens about the possibility of extremely heavy rainfall on Sunday accompanied by lightning during the day. The civic machinery, including the Disaster Management Cell, has been put on alert: BMC spokesperson.

The Brihanmumbai Municipal Corporation (BMC) has said that it is prepared for the monsoon onslaught and has asked citizens to be careful.

Intense spells of rain likely to occur in the districts of Mumbai, Thane and Raigad during next few hours, warns IMD.