Banerjee flew to Delhi on Tuesday, which was also PM Modi`s birthday. 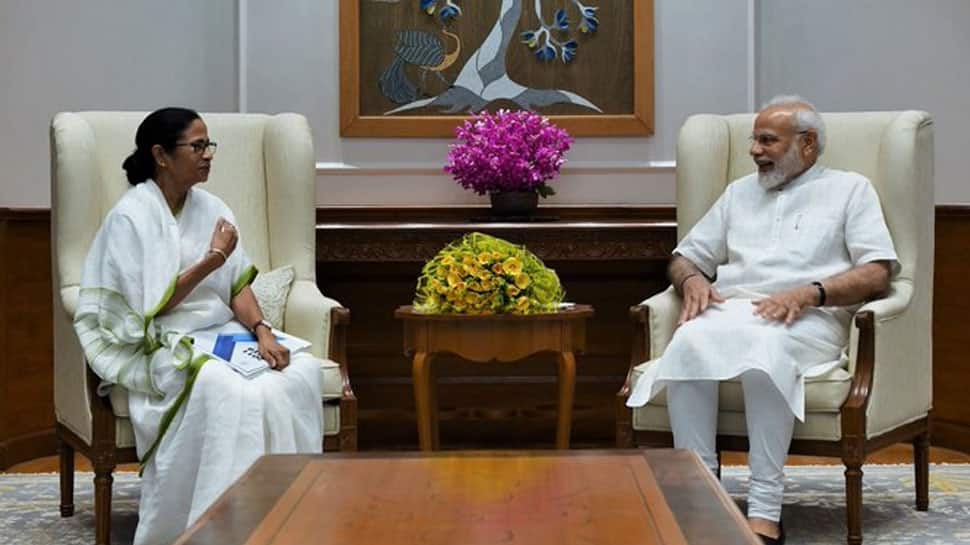 New Delhi: West Bengal Chief Minister Mamata Banerjee on Wednesday met Prime Minister Narendra Modi in the national capital during which she took up the issues of pending projects in her state.

Speaking to reporters after meeting the PM, Mamata said, ''We have been demanding Centre's support on changing Bengal's name. I have reminded the PM  about it. My MPs had met him.''

''I have requested the Prime Minister to attend the programme for world's second-largest coal block Deocha Pachami in Birbhum district after Navratri puja. The project is worth Rs 12,000 crores,'' the West Bengal CM said.

The Trinamool Congress chief said that she has given papers on what her government has done in recent years in Bengal.

''We have asked him to write off Bengal's debt. I will try to meet the Home Minister too,'' Mamata said.

She categorically said that it was a meeting between two governments and not much should be read into it politically.

Interestingly, Banerjee had got Kolkata-made sweets delivered to PM Modi's 7, Lok Kalyan Marg residence, a day before their meeting.

Banerjee flew to Delhi on Tuesday, which was also PM Modi`s birthday.

Her meeting with the PM comes at a time when the Central Bureau of Investigation (CBI) is trying to locate her close aide and former Kolkata Police Commissioner Rajeev Kumar for questioning in connection with the multi-crore Saradha chit fund scam case.

Mamata's meeting with the PM has triggered intense speculations in the political circles and the Bengal unit chief of the Congress party, Somen Mitra, has accused the West Bengal CM of making a desperate bid to ensure an "escape route" for Kumar, who is currently untraceable.

"Do we understand that honourable CM of West Bengal Mamata Banerjee is going to Delhi on the day PM Modi celebrates his birthday, and as a return gift for the birthday wishes, request an escape route for the ex-Commissioner of Kolkata Police in the Saradha chit fund scam?", Mitra asked.

The state BJP in-charge Kailash Vijayvargiya also dubbed it as the "last-ditch bid" of the fiery Bengal leader to save the police officer regarded as being close to her.

While the CBI is looking to question Kumar, Banerjee herself sat on a 'dharna' to protest of the CBI team visiting Kumar`s residence.

"Why is she seeking a meeting with PM Modi all of a sudden is anybody`s guess", Vijayvargiya said, recalling Banerjee`s sharp criticism of Modi during the 2019 general election campaign.

The last time the two leaders met was at the convocation ceremony at Visva Bharati University in Shantiniketan on May 25, 2018.

Many top Trinamool Congress (TMC) leaders` names have been dragged into the scam investigation, including sitting MP Shatabdi Roy and former MP Kunal Ghosh. TMC leader Derek O`Brien has been quizzed in the matter by the investigation agency.

With the CBI now looking for Kumar, there is visible discomfort within the ranks of the TMC. RSS leader Indresh Kumar on Tuesday launched a scathing attack on senior Congress leader Digvijaya Singh saying he was "mentally ill" and compared him with Pakistan Prime Minister Imran Khan.