The government on Thursday (April 2) took strong action against Tablighi Jamaat, Nizamuddin, and blacklisted 960 foreigners and canceled their tourist visas after they were found involved in activities related to the Jamat, according to Office of the Home Minister. 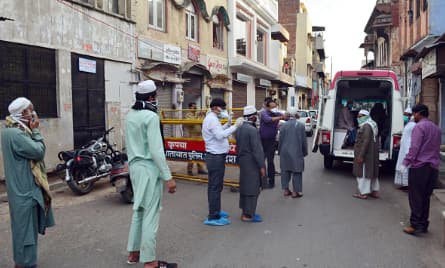 New Delhi: The government on Thursday (April 2) took strong action against Tablighi Jamaat, Nizamuddin, and blacklisted 960 foreigners and canceled their tourist visas after they were found involved in activities related to the Jamat, according to Office of the Home Minister.

The Ministry of Home Affairs has also directed the Delhi Police and the DGPs of other concerned states to take necessary legal action against these 960 foreigners for violating the provisions of the Foreigners Act, 1946, and the Disaster Management Act, 2005.

The MHA action comes after the Tablighi Jamaat's congregation at south Delhi's Nizamuddin, which has emerged into one of the coronavirus hotspots in the country.

Earlier in the day, a senior home ministry official said that about 9,000 Tablighi Jamaat members and their primary contacts have been quarantined till now in the country after the government undertook "massive efforts" as part of steps to check the spread of the novel coronavirus.

Punya Salila Srivastava, a joint secretary in the Union Home Ministry, told reporters during a daily briefing that out of about 2,000 such Tablighi Jamaat members in Delhi, 1,804 have been shifted to quarantine centres while 334 symptomatic persons admitted to hospitals.

She said among the ones in Delhi, 250 are foreigners, adding "The home ministry along with states and union territories launched a massive effort and about 9,000 Tablighi Jammat workers and their primary contacts were identified and quarantined. Among these, 1,306 people are foreigners."

She said the Ministry of Home Affairs (MHA) is constantly reviewing the ongoing lockdown in the country and added that the home secretary (Ajay Bhalla) has written to states and union territories that "the lockdown measures should be implemented in letter and spirit".

Notably, Prime Minister Narendra Modi announced a 21-day lockdown from March 25 to prevent the spread of the coronavirus that has claimed live and infected people.