A huge quantity of arms and ammunition, including 1 AK-47 rifle, 2 chime pistols, 4 pistol magazines, 76 AK-47 rounds, 90 pistol rounds and 20 different kinds grenades, have been recovered from the possession of accused. 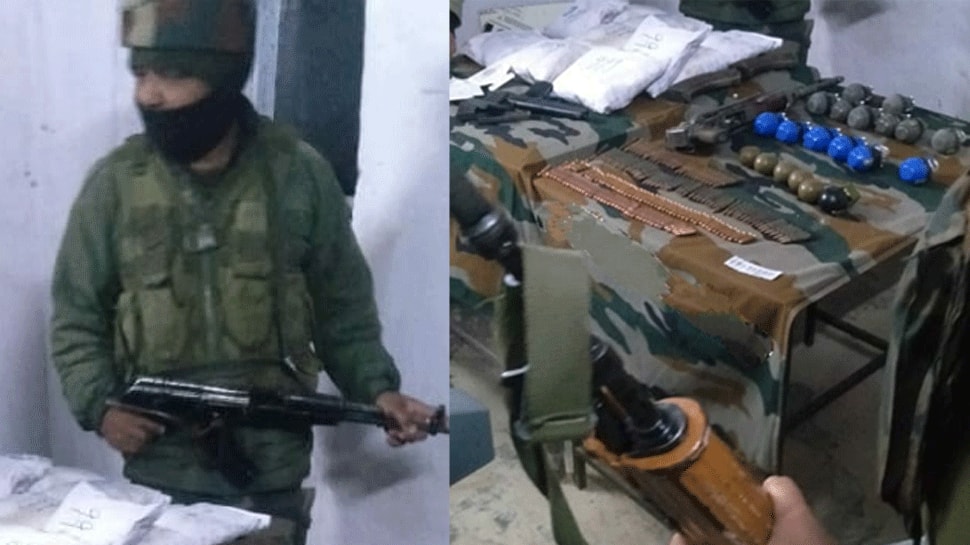 Srinagar: Indian Army and Jammu and Kashmir Police in a joint operation busted a narco terror module at Sadhna Pass in north Kashmir's Kupwara district and arrested three people in connection with the case. The team recovered 10 kg of brown sugar, arms and ammunition and two vehicles from the possession of the accused.

"A huge consignment of warlike stores and narcotics was apprehended last night at Sadhna Pass at the mouth of Tangdhar, Kupwara. Based on specific inputs about smuggling, Army Dogs, aided by detectors and scanners, facilitated to locate the concealed and hidden packages from the vehicle. The search operation led to the apprehension of three suspects and the seizure of two vehicles. 1 AK-56, magazine and ammunition, 2 pistols with two magazines and ammunition, 20 grenades and approximately 10 kg narcotics were recovered. Joint search operation is in progress," read a statement by the Indian Army.

SSP Kupwara Sriram Dinkar said, "Acting on a specific input, the Indian army, 7 RR and Kupwara Police who is deployed at Sadhna Pass got a big success. Details of two accused who were involved in smuggling of narcotics were intercepted. They were identified as Bashir Ahmad Shiekh and Abdul Amir Sheikh, both residents of Tangdhar. Both accused have been arrested and almost 10 kg of narcotics, worth Rs 50 crore in the international market, have been recovered from their possession."

He added that a huge quantity of arms and ammunition, including 1 AK-47 rifle, 2 chime pistols, 4 pistol magazines, 76 AK-47 rounds, 90 pistol rounds and 20 different kinds grenades, were recovered from their possession.

According to the official, the duo was accompanied by a third person, who was driving a second vehicle. The recovery was made by a joint team of Army, Jammu and Kashmir Police.

As per officials, more arrests are expected in connection with the case.

Congress to hold nation-wide 'save democracy' protest on Monday; calls off stir outside Rajasthan Raj Bhavan