Prime Minister Narendra Modi and his Israeli counterpart Benjamin Netanyahu have hailed the bilateral ties between the two countries which they referred to as  "natural partnership" in a joint editorial. 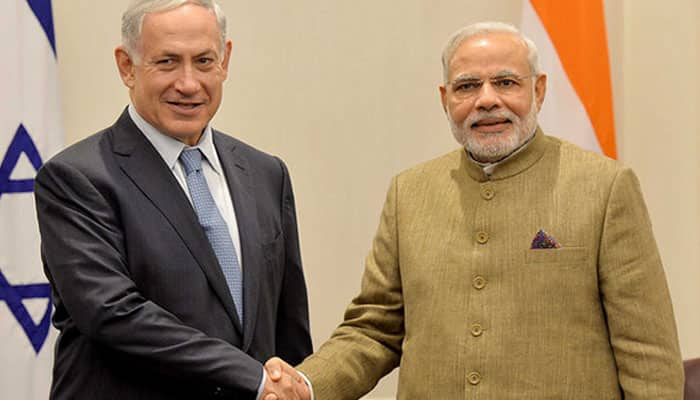 New Delhi: Prime Minister Narendra Modi and his Israeli counterpart Benjamin Netanyahu have hailed the bilateral ties between the two countries which they referred to as  "natural partnership" in a joint editorial.

"Both our nations are complex. Like yogic asanas grounding down and pulling up at the same time, they face many challenges. By working together we can overcome some of the challenges," the two influential world leaders wrote in the editorial published in 'The Times of India', just ahead of PM Modi's Israel visit.

The two leaders also expressed confidence and wrote that "25 years from now, Indians and Israelis will look back on this visit as the first of many historical milestones that we reached together in the great friendship between our peoples."

PM Modi departed for Israel this morning in the first ever visit by an Indian premier. During his three-day visit, the two countries are set to hold extensive talks on defence, security, water management, science and technology, education, agriculture and more.

In their joint editorial, the two prime ministers also spoke on what they describe as a "unique blend of complementary capabilities" that has forged strong ties between India and Israel, particularly in the field of technology.

They also shared their concerns on the threat terrorism poses to both countries and to global peace and stability.

India has traditionally been cautious in its dealing with Israel, partly because of an alleged wariness of upsetting Arab states and Iran, upon whom it relies for its vast imports of oil, as also its own large Muslim population.

Modi's visit also holds significance since India has traditionally downplayed relations with Israel fearing it would alienate the country’s 170 million Muslims and upset the Aranb states.

But Modi, a popular leader facing weak political opposition at home, is embarking on the trip to Israel with little concern for domestic fallout - and is also skipping a similar visit to meet Palestinian Authority President Mahmoud Abbas in Ramallah.

In the second and final leg of his tour, Prime Minister Modi will visit Hamburg in Germany to attend the 12th G-20 Summit.