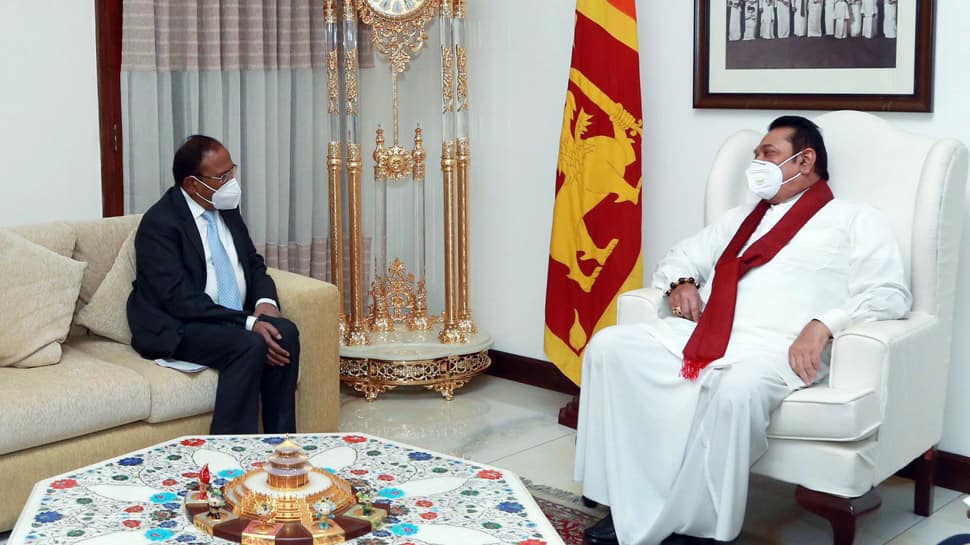 Sri Lankan Prime Minister Mahinda Rajapaksa on Friday sought India's continued assistance to boost the bilateral ties as he met with National Security Advisor Ajit Doval, who also held talks with the country's defence secretary to further advance the "valuable" cooperation which contributes to peace and security in the region.

Doval is scheduled to meet President Gotabaya Rajapaksa for a one on one discussion on Saturday (November 28) afternoon. He arrived in Colombo on Friday for trilateral maritime dialogue among India, Sri Lanka and the Maldives.

Sri Lanka will host the fourth national security advisor trilateral meeting on maritime security cooperation with India and the Maldives on Friday and Saturday. The meeting will take place after six years - the last meeting was held in New Delhi in 2014.

Rajapaksa asked the senior Indian official for continued assistance to Sri Lanka in its bilateral help, the prime minister's office said. He was particularly keen on the need for India to extend its housing assistance to the country's south, it said.

India has previously built houses in the north and eastern regions ravaged by the nearly three-decade-long military conflict, and in the central tea plantation areas for the Tamils of Indian origin. "NSA Ajit Doval called on PM Mahinda Rajapaksa. NSA conveyed greetings from PM Narendra Modi and recalled the contribution of the successful Virtual Bilateral Summit between the two leaders to progress in bilateral cooperation," the Indian High Commission in Colombo said in a tweet.

PM Modi held wide-ranging talks with his Sri Lankan counterpart Mahinda Rajapaksa during the summit in September, covering the entire spectrum of bilateral ties and with a focus on further expanding cooperation in key areas. "An opportunity has come to begin a new chapter in India-Sri Lanka ties after your party's electoral victory. People from both the countries are looking at us with new hope and expectations," PM Modi had said.

Earlier, Doval was accorded a warm welcome by Army Commander Lt Gen Silva Shavendra on his arrival in Colombo. Doval and Maldivian Defence Minister Maria Didi are expected to lead their respective delegations to the trilateral meeting. There will be observers from Bangladesh, Mauritius and Seychelles at the meeting, the Sri Lankan military said.

On Thursday, the External Affairs Ministry in New Delhi said the NSA-level trilateral meeting had served as an effective platform for cooperation among Indian Ocean countries. "The meeting will provide an opportunity for discussion on issues pertaining to cooperation in maritime security in the Indian Ocean region," the MEA said in a statement.

This would be Doval's second official visit to Sri Lanka this year. In January, Doval visited the island nation and discussed a range of bilateral issues, including strengthening cooperation in defence, intelligence sharing and maritime security with President Gotabaya Rajapaksa.