Political jostling in Punjab while eying on forthcoming assembly elections

Punjab is gearing up for Assembly elections and will go to the polls in the first quarter of 2022. 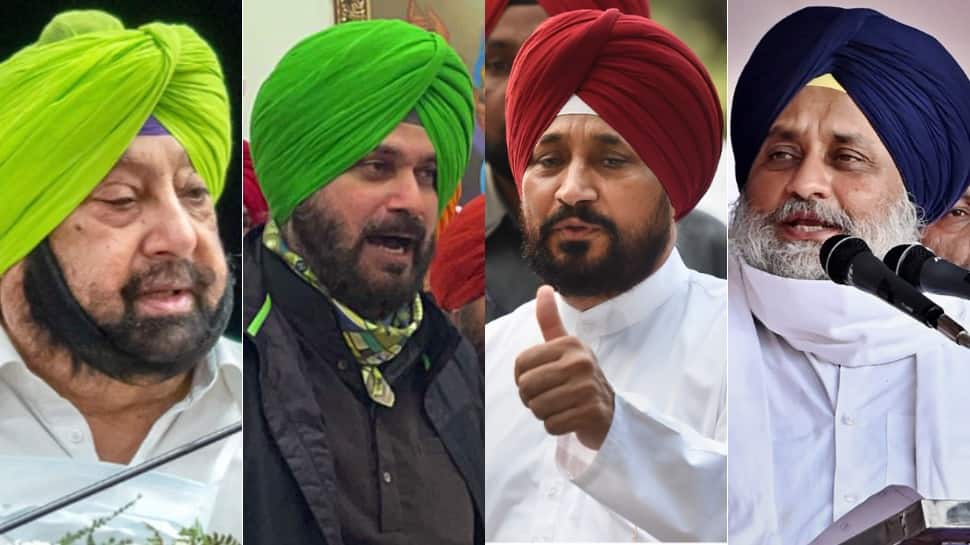 Chandigarh: Political schizophrenia has gripped Punjab with the leaders of both the traditional as well as contemporary political parties swinging between political issues including three agri laws, sacrilege, drug abuse etc and their personal aggrandizement. The aim is to win the sympathy of voters by projecting themselves as 'lone saviors' and sympathizers of the common man while eying on the political dissenters of other parties to join their fold in the forthcoming 2022 assembly elections in the state. It has made the situation as an old chestnut goes 'prediction is very difficult'.

In other words, the political atmosphere of Punjab is not stable but turbulent especially after Shiromani Akali Dal (Badal) (SAD-B) severing ties with its long time coalition partner BJP on the issue of three farm laws even withdrawing Harsimrat Kaur Badal, wife of SAD(B) president Sukhbir Singh Badal, from union cabinet and forging a new political alliance with Mayawati led-Bahujan Samaj Party (BSP), Congress bearing the brunt of Navjot Singh Sidhu triggered infighting and heavy factionalism, Aam Aadmi Party (AAP) attempting to make a space in the 'political vacuum' of  Punjab and splinter Akali factions finding opportunities to make their presence felt in Punjab even as BJP has announced to contest all the 117 seats of Punjab alone.

The issues of Bargari sacrilege and Behbal Kalan firing are also on the top of the list of the political parties.

All the political parties have buckled up against BJP on the issues of farm laws and are trying to win the sympathy of farmers - a major vote bank - with BJP refusing to buzz from its stand on the farm laws and openly refusing to repeal them.

BJP a lost cause in Punjab , trying to make a back door entry through there long term ally the Akali Dal …. Desperate to make them heroes but they will remain Zeros in Punjab …. Both parties two sides of the same coin ! https://t.co/PJGffcOmba

With the fact that peasants are the mass base of SAD(B) that also has a wide network of its cadre across the state, the nonagenarian patron of SAD(B), Parkash Singh Badal and his son Sukhbir Singh Badal are once again banking on farmers support and are not only keeping their hopes of withdrawal of farm laws alive but, to win their sympathy, have announced to provide government job to one member of the farmer's family who has lost his life during the ongoing farmers struggle.

After their alliance with BSP and inclusion of Hindu leaders like Anil Joshi, a former Punjab cabinet minister who was expelled from BJP due to alleged anti-party activities, the Akali's are hoping to get the votes of Scheduled Caste (SC) and Hindu even as major differences had already surfaced in the SAD(B)-BSP alliance on the issue of seat-sharing.

Cricketer-turned-politician Navjot Singh Sidhu, who enjoyed the close confidence of Gandhi siblings, managed to reach the post of president of Punjab Pradesh Congress Committee (PPCC) through his constant Twitter attacks on the party’s Punjab leadership leading to the resignation of former chief minister Captain Amarinder Singh.

Amarinder's outburst for his 'humiliation' on Gandhi siblings - Rahul Gandhi and Priyanka Gandhi - stating them as ‘inexperienced’ has only opened a pandora’s box in Punjab Congress with the party leaders making all-out efforts, but in vain, to post a ‘united face’ before the voters and are instead giving enough ammunition to the opposition political parties to further ‘embarrass’ the Congress leadership.

I am grateful to my leader Smt.Sonia gandhi ji,Shri @RahulGandhi ji, Smt. @priyankagandhi Ji and Smt.Ambika Soni Ji for holding my hand and bestowing me the opportunity to serve the state of Punjab as Chief Minister. In me the entire @INCIndia leadership has honoured a common man pic.twitter.com/t5whA4WPOz

Given the political storm and upheaval in Punjab, the AAP leaders in the state hope to capture the power after the 2022 assembly elections and have readied themselves for the battle of the ballot but are yet to come out of the 'disorganized' tag. To woo the Punjabi voters, AAP’s national convener and Delhi chief minister Arvind Kejriwal has already announced freebies including 300 units of free electricity and the party has also been issuing ‘Kejriwal Muft Bijli Guarantee Cards’.

On the other hand, BJP, which managed to take its tally from three seats to 77 in West Bengal, is hoping to replicate its performance in Punjab where it currently has three seats as well. Earlier, as per the seat-sharing formula with SAD(B), BJP used to contest 23 assembly seats while their coalition partners would contest the remaining 94 seats in the state. However, after the split, it will be interesting to see if the saffron party is ready to pitch its candidate on all the 117 Punjab assembly constituencies in the 2022 assembly elections.

Meanwhile, Congress has already made an SC as chief minister of Punjab and the BJP has also indicated making a Dalit as a CM face in the poll-bound state. The sulking dissident Akali leaders who parted their ways from SAD(B) including Sukhdev Singh Dhindsa and Ranjit Singh Brahampura had formed SAD (Taksali) and SAD (Democratic) respectively, but have now merged to form SAD (Samyukat). They are also trying to find their lost political base and could shake hands with some other political parties ahead of the assembly elections next year.