Prime Minister Narendra Modi to meet 4 world leaders on Monday; J&K issue likely to come up in talks with US President Donald Trump

The prevailing India-Pakistan situation in the backdrop of New Delhi’s move to abrogate Article 370, which granted special status to Jammu and Kashmir, is bound to be discussed in meeting between Modi and Trump. 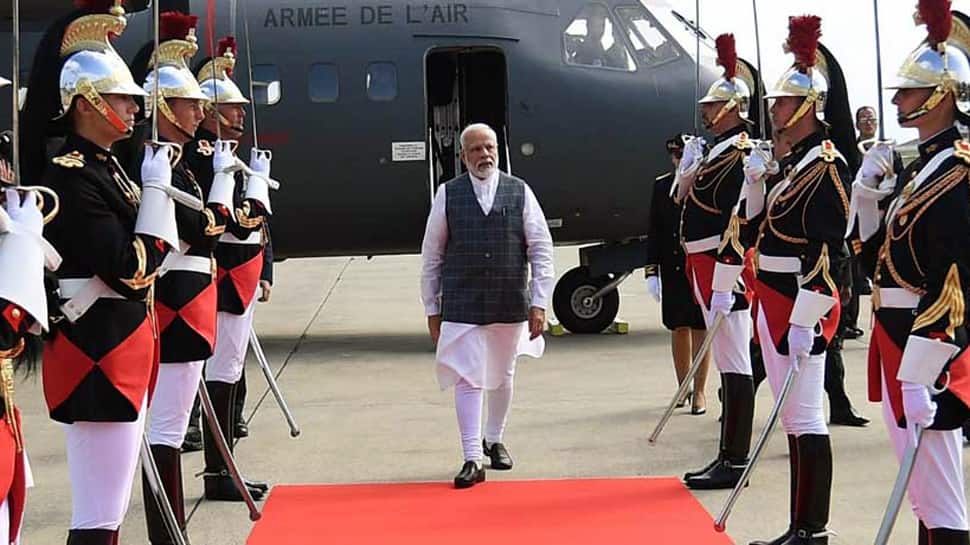 It will be a packed day for Prime Minister Narendra Modi as he is slated to meet four world leaders and participate in two sessions at the G7 summit in Biarritz, France. He will be meeting US President Donald Trump, Senegal President Macky Sall, German Chancellor Angela Merkel and President of Chile Sebastian Piñera.

The two sessions wherein he will be participating are on Climate, Biodiversity, Oceans & on Digital Transformation.

The most talked about meet will be with US President Donald Trump that will take place at 3.45 pm and will continue till 4.30 pm. This will be the second meet between the two leaders this year and comes two months after they met on the sidelines of the G20 summit in Osaka, Japan.

This is also the first time that Modi and Trump would meet after New Delhi abrogated Article 370, which granted special status to Jammu and Kashmir. The prevailing India-Pakistan situation in the backdrop of New Delhi’s move is bound to be discussed.

"India’s decision to rescind Article 370 in Kashmir is an internal decision, but certainly with regional implications. And President Trump will likely want to hear how Prime Minister Modi intends to calm regional tensions in light of this significant move", a senior Trump administration official had said in a backgrounder teleconference on Trump's G7 summit.

Donald Trump has on three occasions offered to mediate on Kashmir, and the same has irked New Delhi. India has made it clear that ties with Pakistan follow Shimla and Lahore agreements, according to which no third-party mediation is acceptable. Trade, defence ties and the Afghan peace process is also slated to be discussed.

Including the meeting with the US President, Prime Minister Modi has six bilaterals on the sidelines of the G7 summit.

This was the first meet between the two leaders since Boris Johnson took charge as the British Prime Minister. The meeting lasted for 30 minutes.

Both leaders had a conversation last week in which PM Modi congratulated him for assuming charge as British PM.

During the same conversation, Prime Minister Modi had raised the issue of violent protests that took place outside the Indian mission by Pakistani and Khalistani groups on Independence Day.

India is "Biarritz partner" country along with Australia, Chile, South Africa, Rwanda, Senegal, Egypt and Burkina Faso. Climate, biodiversity will be the main focus of the 45th G7 summit whose theme is "combating inequality".

It is after a gap of more than 10 years that India has been invited at the G7summit, the last time being in 2005 when the then British Prime Minister Tony Blair had invited the then Indian Prime Minister Manmohan Singh at the Gleneagles summit.

On Thursday, Prime Minister Modi was in France on a state visit and met with French President Emmanuel Macron for the fifth time. He had earlier visited France in 2017 followed by the visit of the French President in 2018 and then meetings on the sidelines of G20 summit in Argentina and Japan in December 2018 and June 2019, respectively. After his France visit, the Prime Minister went to the UAE and Bahrain where he met the top leadership and launched RuPay card.