As the protesters tried to enter the premises, security forces confronted them that led to a clash. Members from both sides suffered minor injuries. 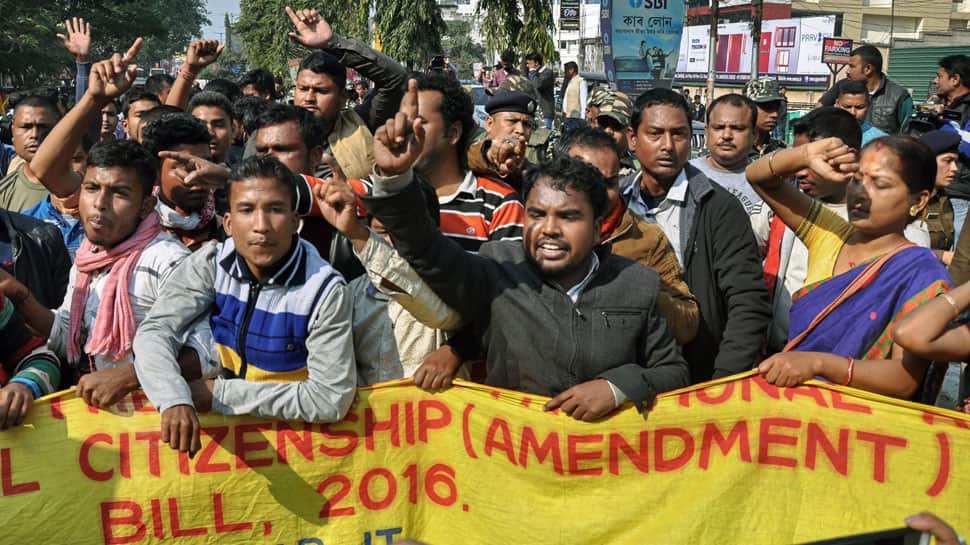 Guwahati: Protests continued unabated against the Citizenship Bill across the state on Sunday and over hundred agitators were picked up when they blocked the road to Kaziranga University, where Chief Minister Sarbananda Sonowal went for its convocation.

While Sonowal was in the 5th Convocation ceremony of the university at Jorhat, over 100 protesters from Krishak Mukti Sangram Samiti (KMSS) and Asom Jatiyatabadi Yuva Chhatra Parishad (AJYCP) shouted slogans and showed black flags in front of the main gate.

As the protesters tried to enter the premises, security forces confronted them that led to a clash. Members from both sides suffered minor injuries.

The situation was brought under control after the arrest of over 100 protesters and all of them were immediately shifted from the university campus, a police official said. Police detained the agitators for a brief period till the programme got over and cleared the road.

The condition of three student leaders, who were on an indefinite hunger strike inside jail after they were arrested on January 8 for allegedly vandalising BJP office at Golaghat, deteriorated and they were admitted to hospital.

In Karbi Anglong district, hundreds of students blocked the National Highway-36 for hours, while Jogi and Kalita communities burnt copies of the Bill on NH-37 at Dudhnoi in Goalpara.

Leading artistes poets and singers, including popular singer Dikshu, held a sit-in at Golaghat and demanded the government o scrap the document. The Forum Against Citizenship Act Amendment Bill called for burning of the replica of the Bill during 'Magh Bihu' on Tuesday.

Criticising the BJP-led government at Centre and state, the Left Democratic Manch vowed to continue the agitation till the Bill is scrapped completely and announced a series of programme across the state from February 1.

The Citizenship Amendment Bill seeks to amend the Citizenship Act, 1955 to grant Indian citizenship to the Hindus, Sikhs, Buddhists, Jains, Parsis and Christians, who fled religious persecution in Afghanistan, Bangladesh, Pakistan and entered India before December 31, 2014, after six years of residence in the country, instead of the current 12 years, even if they do not possess any proper document.