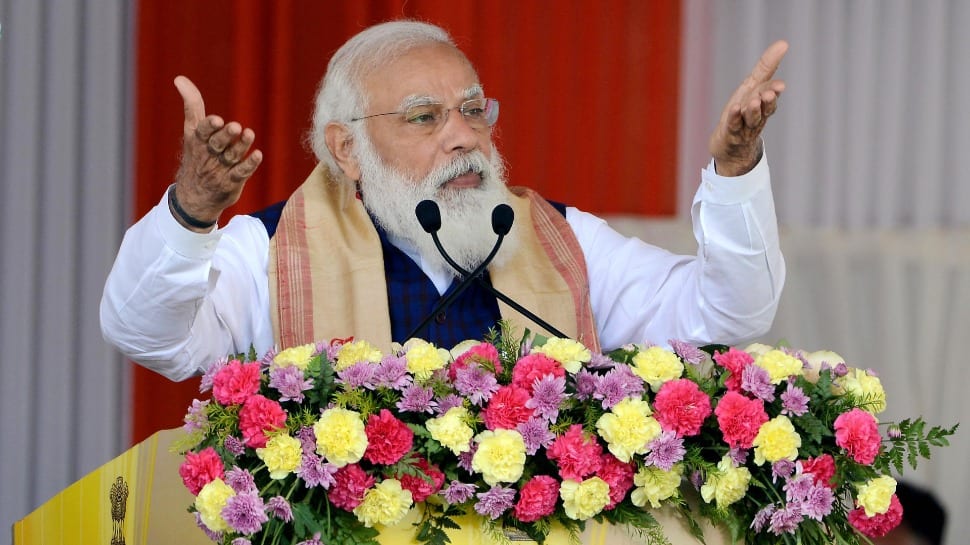 New Delhi: Prime Minister Narendra Modi on Saturday (January 23, 2021) visited Assam and expressed that the rapid development of North East is necessary for an 'Aatmanirbhar Bharat'.

PM Modi while distributing land allotment certificates to indigenous landless people in Assam's Sivasagar said, "For a self-reliant India, the rapid development of North East and Assam is necessary. The road to self-reliant Assam passes through the confidence of the people of Assam. Confidence only grows when basic facilities are available and the infrastructure is better."

To build an Aatmanirbhar Bharat, we have to focus on the rapid development of the Northeast. pic.twitter.com/Ym3fE5PIt5

Speaking on the occasion, the Prime Minister said that with over 1 lakh native families of Assam getting the right to land, a big concern has gone away from the life of people in Sivasagar.

He said, "Today's event is connected with self-respect, independence and safety of the native people of Assam."

PM Narendra Modi said that the Centre is taking steps to include Sivasagar in the five most Archaeological sites in the country.

Distribution of land pattas/allotment certificates at the large public meeting in Sivasagar was a historic occasion. This will ensure a life of dignity for many and protect Assam’s unique culture. pic.twitter.com/Y3vyvRfFfB

The Prime Minister said that even after so many years of independence, there were lakhs of families in Assam who were earlier deprived of land and added that when the Sonowal Government came to power, more than 6 lakh tribals had no papers to claim their land.

He said now with the right to land, these beneficiaries can be assured of the benefit of many other schemes, which they were deprived of, like PM Kisan Samman Nidhi, Kisan credit card, Crop Insurance Policy. Not only this, but they will also be able to get loans from banks.

Prime Minister Modi said that every region of Assam is on the path of peace and progress due to the policy of taking every tribe together.

We are working towards Assam’s development based on the requirements and aspirations of the state’s dynamic people. pic.twitter.com/fFiOBmWDAI

"With the historic Bodo agreement, a large part of Assam now has returned to the path of peace and development," said PM Modi and hoped that with the recent election of the representatives of the Bodoland Territorial Council in the wake of the agreement will usher in a new paradigm of development.

PM stated, "Over the years, unprecedented work has been done in Assam on both these fronts. In Assam, Jan Dhan bank accounts have been opened for about 1.75 crores poor. Due to these accounts, money was transferred directly to bank accounts of thousands of families in the time of Corona. In Assam, almost 40 per cent of the population are covered under Ayushman Bharat scheme. Out of which about 1.5 lakh have received free treatment."

He added that the toilet coverage in Assam has increased from 38 per cent to 100 per cent in the last 6 years.

"Five years ago only less than 50 per cent of households had access to electricity, which has now reached almost 100 per cent household. In Assam under Jal Jeevan mission, in the last 1.5 years piped water connections have been provided in more than 2.5 lakh homes," said PM Modi.