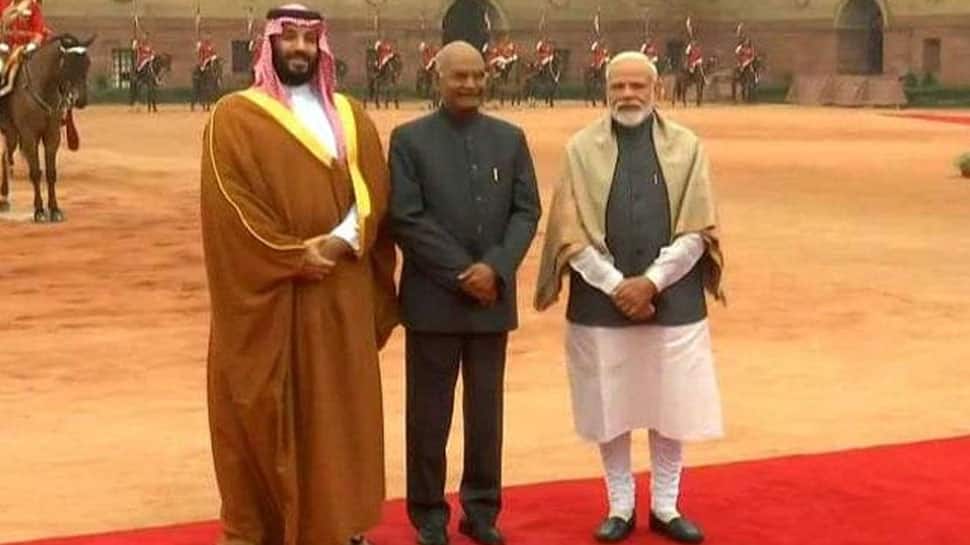 NEW DELHI: Visiting Saudi Arabian Crown Prince Mohammed bin Salman was on Wednesday given a ceremonial reception at the Rashtrapati Bhawan in the national capital.

He was then received by President Ram Nath Kovind and Prime Minister Narendra Modi.

After the ceremonial reception, the Saudi Arabian leader said, ''Today, we want to be sure that this relationship is maintained and improved for the sake of both countries. With the leadership of the President and the PM, I am sure we can create good things for Saudi Arabia and India.''

The Saudi Crown Prince will hold parleys with Prime Minister Narendra Modi on a wide range of issues including cross-border terrorism and explore ways to further strengthen the defence ties between the two countries.

Breaking protocol, PM Modi went to the Delhi Airport to receive the Saudi Crown Prince on Tuesday evening and welcomed the visiting dignitary with a tight hug.

The Crown Prince arrived in Delhi on a less than 30-hour visit, a day after he finished his two-day visit to Pakistan.

During their talks, both leaders are also expected to look at ways to enhance the defence ties, including having a joint naval exercise, stated official sources.

His visit comes in the backdrop of the escalating tension between India and Pakistan following the Pulwama terror attack carried out by Pakistan-based Jaish-e-Mohammad (JeM) terror group in which 40 CRPF were killed.

During the high-profile visit to Pakistan, the Crown Prince declared his decision to invest 20 billion dollars in the country and also praised Islamabad’s ‘efforts for regional peace and security’. Further, he said that dialogue was the only way to resolve the ‘outstanding issues’ between India and Pakistan.

OFB gets nod for bulk production of 'Dhanush': All you need to know about India's long-range artillery gun