On 15th day of their indefinite strike, over 48,000 employees along with leaders and activists of opposition parties, trade unions, teachers and workers took to streets to protest what they call 'dictatorial' attitude of Chief Minister K. Chandrashekhar Rao. 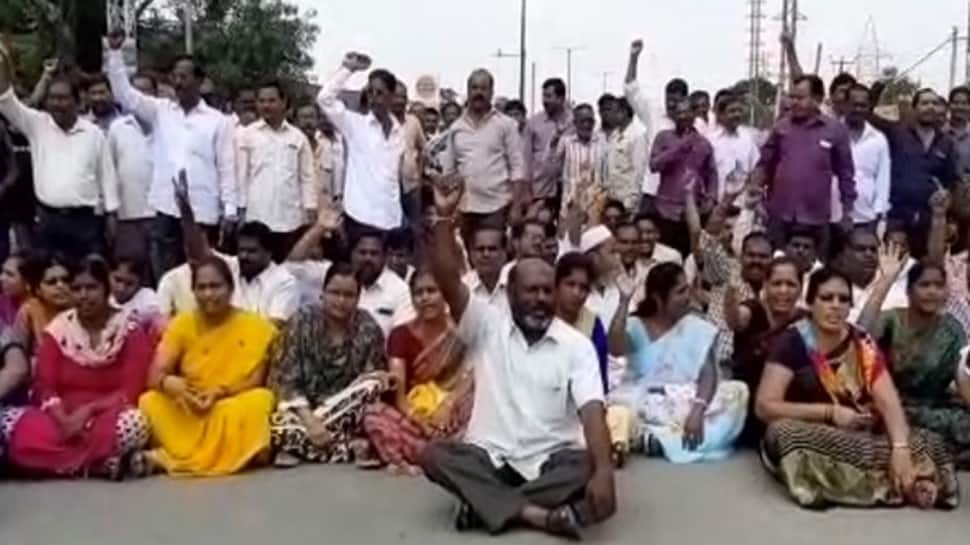 On 15th day of their indefinite strike, over 48,000 employees along with leaders and activists of opposition parties, trade unions, teachers and workers took to streets to protest what they call `dictatorial` attitude of Chief Minister K. Chandrashekhar Rao.

This was the first major and state-wide shutdown in six years against Chandrashekhar Rao. Those who had joined hands with Rao for numerous strikes and mass protests during Telangana movement, this time joined striking employees of TSRTC to target him.

Slogans of `CM down down` rent the air at several places in Hyderabad and 32 other districts as the protesters staged sit-in and road blockades to condemn the government`s adamant attitude on the demands of the employees.

While shops and business establishments remained open and private vehicles plied as usual, the public transport services came to a standstill, causing inconvenience to commuters.

Stray incidents of stone pelting and attacks on temporary employees recruited by TSRTC to operate bus services marred the shutdown. About a dozen buses were damaged in the incidents.

Majority of the TSRTC buses remained confined to depots in Hyderabad and other districts with protesting employees staging a sit-in to prevent the vehicles from coming out.

Mahatma Gandhi Bus Station (MGBS), the biggest bus station in Hyderabad, wore a near deserted look as bus services to most of the destinations in Telangana and neighbouring states were suspended.

Adding to the woes of the commuters in Hyerabad, the Ola and Uber cab drivers also went on an indefinite strike from Saturday to press for their demands to regularise the cab aggregator market. The drivers` association claimed that 50,000 cabs have gone off the roads but some cabs were seen plying.

Police arrested leaders of the Opposition parties for staging protests along with the striking TSRTC employees at various places in the state. TJS president M. Kodandaram, TDP leaders L. Ramna and R. Chandrashekhar Reddy and leaders of the Left parties were arrested by the police in Hyderabad.

Tension prevailed at RTC Cross Roads in Hyderabad as leaders and workers of CPI-M and other groups sat on the road, raising anti-government slogans. Police bodily lifted the protesters to the waiting vehicles and whisked them away.

The protest near Bus Bhawan, TSRTC headquarters, also triggered tension. CPI-ML`s New Democracy leader P. Ranga Rao suffered bleeding injury on his hand when the policemen bundled him into a vehicle and was trying to shift him to police station. Ranga Rao, whose hand was stuck in car, was later taken to hospital.

Congress party leaders Mallu Bhatti Vikramarka, Sridhar and others were arrested near Charminar when they were heading towards MGBS to lead a protest.

State BJP chief K. Laxman and others were taken into custody by the police at Abids in the heart of the state capital when they staged a protest in support of TSRTC employees.

Students of Osmania University tried to take out a rally but the police foiled their attempt and took the protesters into custody. The university, which was the nerve centre of the movement for statehood to Telangana, has been witnessing protests in support of TSRTC employees for last few days.

Employees of State Secretariat also staged a protest at BRK Bhawan in support of the striking TSRTC employees.

Police made elaborate security arrangements in Hyderabad and other towns to prevent violence. TSRTC was operating few buses with the help of temporary employees under police protection.

The shutdown was called by the Joint Action Committee (JAC) of TSRTC employees, who have been on strike since October 5 to press for their demands, the main being TSRTC`s merger with the government. JAC has blamed the government for the situation, saying it was not inviting them for talks despite the direction of the Telangana High Court.

The government has not only ruled out talks with the employees, but declared that 48,000 employees as `dismissed themselves` by not joining the duty before the expiry of the deadline. Chief Minister K. Chandrashekhar Rao has ruled out taking back these employees into TSRTC and has asked it to recruit more temporary employees and hire more private buses.

The strike has seen two TSRTC employees commit suicide as non-payment of salaries for September has enraged the staff.

JAC has claimed that the shutdown was total and was supported by all sections of people. JAC leaders plan to announce their future course of action later in the day.

The government, which has come under flak from the Opposition for taking a tough stand on the strike, is focusing on restoring normal bus services with the help of temporary services.

The chief minister has directed TSRTC to ensure 100 per cent normalcy by Monday, when educational institutions will re-open after extended Dasara holidays. They were scheduled to re-open on October 14 but the government extended the holidays in view of the strike.