In the first reaction by any country, Turkey has welcomed Delhi-Taliban engagement and said "engagements with all stakeholders are important". 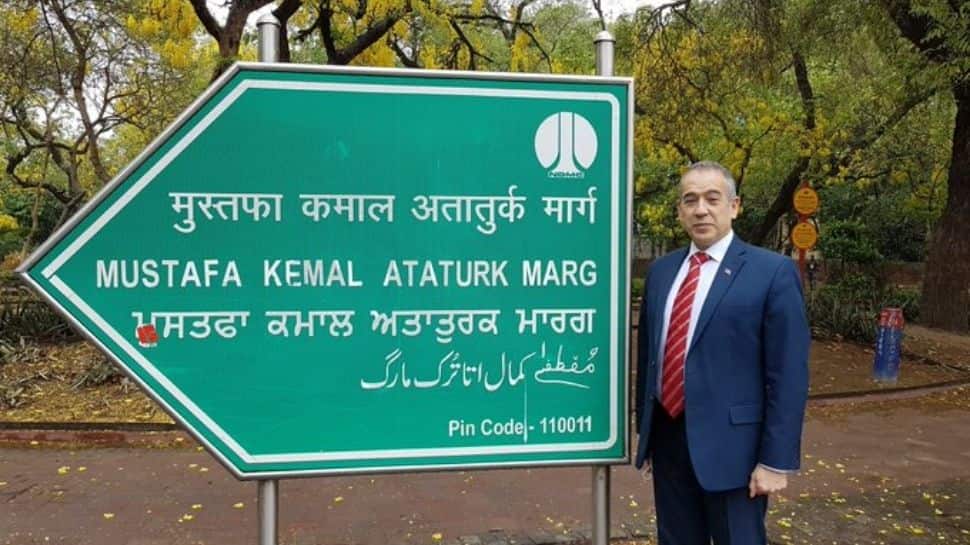 Speaking to WION's Diplomatic correspondent, Sidhant Sibal, Envoy Sunel said, "Turkey and India would benefit from improving comprehensive bilateral relations in all fields."
Fırat Sunel has been Turkish Envoy to India since May 2021, and had been previously Turkey's founding envoy to Eritrea. He has also authored three novels, one of which was adapted to TV series.

Meanwhile, Turkey has welcomed Delhi-Taliban engagement. Welcoming the statement by the Ministry of External Affairs on India's Taliban engagement, Turkey's Ambassador to India, Fırat Sunel, said, "engagements with all stakeholders are important". Envoy Sunel explained, "We believe that steady and gradual engagement with the Taliban is one of the key factors for stability in Afghanistan."

The MEA, on August 31, announced that the Indian envoy to Qatar, Deepak Mittal, and the Head of the Taliban’s Political Office, Sher Mohammad Abbas Stanekzai, had met. This was the first public announcement of such a meeting, which the statement pointed out happened at the request of the Taliban.

WION: How do you see India-Turkey ties?

Fırat Sunel: Turkey and India have a long history of close ties. And deep-rooted cordial ties between peoples always contribute positively to interstate relations.  We have many commonalities based on culture and history and share fundamental values such as democracy and rule of law. Turkey was one of the first countries to recognize India’s independence and to establish diplomatic relations with her in 1947. Turkey was also among the first countries which opened a diplomatic mission in India, namely in July 1948. The Agreement on Cultural Affairs and the Treaty of Friendship signed in 1951 between Turkey and India were other milestones in our friendly relations. We have named two streets in Ankara after the great Mahatma Gandhiji and Rabindranath Tagore, while in Delhi the road right outside the residence of Honourable Prime Minister of India is named after our founding father, Mustafa Kemal Atatürk. Both countries are rising stars in their respective regions with their growing economies and increasing role in the international arena. Naturally, it is a fundamental goal for Turkey to further develop and deepen relations with India and we are pleased to acknowledge similar sentiments from Indian side. There is significant potential for further cooperation in key areas such as commerce, trade, investments, culture, tourism and science. We can further cooperate bilaterally and in the international fora on numerous regional and global issues.

In spite of all these facts, I believe our current relations, especially the economic and commercial ones, are far from reflecting the real potentials of our respected countries. There is great room for further enhancing Turkish-Indian cooperation almost in every field. While we may have differences in certain issues, which is very normal in international relations, we should not allow these to hold hostage the development of our ties. We should focus on our positive agenda as well as common grounds and interests. In short, Turkey and India would benefit from improving comprehensive bilateral relations in all fields.

WION: Since your arrival, we have seen positive developments. This includes Turkey sending assistance to India which interestingly had Rumi quotes. What next is being planned in the ties?

Fırat Sunel: We have an expression in Turkey: “iyi dost kara günde belli olur” (it’s like: a friend in need is a friend indeed). While the Covid-19 pandemic has swept across the world, India was unfortunately one of the countries most adversely affected during the second wave. And as a friend of India, Turkey couldn’t have stayed idle while India was dealing with adversities of the pandemic. We sent medical assistance of approximately 45 tones on board two A400M military cargo aircraft to support Indian people, and what better way to express this with Rumi’s message of hope and optimism. This message of Rumi (“After hopelessness there is so much hope and after darkness there is much brighter sun”) had special relevance here because Sufism is a part of our common cultural values we have been sharing for centuries. Turkey puts human in the centre of her foreign policy. Therefore, we tried to share our sincere feelings with the people of India on many occasions such as disasters, terrorist acts etc. through statements by our Foreign Ministry as well as Embassy. Showing the solidarity with the friends in difficult times is our culture as it is in India. Some people may think that I exaggerate a bit but it is true:  Turkish people still appreciate the contribution of people from British India to Turkey in her liberation war which later inspired also India in her independence struggle against imperialist powers.

Back to the first part of your question: Indeed, this year marked some positive developments in our bilateral relations. For instance, Foreign Ministers HE Jaishankar and HE Çavuşoğlu met in Dushanbe on the margins of the Heart of Asia conference on Afghanistan in March which made the first such interaction in more than a year. I sincerely hope we can soon resume high-level bilateral visits. Next year, Turkey and India will celebrate the 75th anniversary of the establishment of their diplomatic ties. I firmly believe that this will mark a great occasion to the enhancement of our relations.

WION: Any way both sides are planning to increase people to people ties, in a post pandemic world?

Fırat Sunel: Ties between the people of Turkey and India are based on solid foundations. Strong connection between our people was manifested many times in our history by the deep-rooted fellowship and affection. I strongly believe that building on the people to people ties would support the enhancement of relations between states. In this sense, cultural relations will be a priority. We have so many similarities. Turks like to watch Bollywood movies and Indian like watching Turkish series. Turks are very interested in Indian culture and they really have very warm feelings towards Indians. Indians visiting Turkey notice what I say. We have many areas to cooperate from literature to cinema. Tourism relations is also another area that we could improve. I think collaboration in these fields will allow our people to overcome any prejudices. In my tenure I will certainly put special focus on these areas. I hope in the light of the recent updated quarantine regulations for passengers from India to Turkey, more Indian tourists will benefit from the beauties of Turkey and hospitalities of Turkish people.

WION: When it comes to Afghanistan, what is Turkey's way forward. Turkey has been playing a key role in the country. Will Turkey recognise any Taliban led govt in Kabul?

Fırat Sunel: The evil terrorist attack at the Hamid Karzai International Airport on August 26 which we all condemned in the strongest term, made it clear once again that the full restoration of security and civil order and the overall protection of human life and property are of utmost importance. Stability is the most urgent need in Afghanistan and we believe that only inclusive approaches can pave the way to this end. Turkey monitors closely the developments in Afghanistan and follows the talks between the parties carefully. We keep contacts with various Afghan political figures and are ready to do our best for security and wellbeing of the Afghan people. We maintain our diplomatic presence in the country and continuously updating our plans according to developments regarding the security situation. Turkish Embassy in Kabul remains open and our Ambassador implements his duties without any interruption. On the other hand, recognizing any government in Afghanistan is an issue which shall be considered in lights of various factors such as its approach to fundamental rights and its inclusiveness.

WION: How do you see India's role in Afghanistan?

Fırat Sunel: We welcome the statement of the Ministry of External Affairs announcing the first official talks in Doha with Taliban. Engagements with all stakeholder are important. We believe that steady and gradual engagement with Taliban is one of the key factors for the stability in Afghanistan. The situation in Afghanistan would have direct impacts on India. As a country that has contributed USD 3 billion so far for the stability and security of Afghanistan and as a non-permanent member of the UNSC, India can play an active role in this regard.

WION: Any way both countries, India and Turkey are coordinating on Afghanistan.

Fırat Sunel: The instability and security gaps or risks can directly affect our respective countries adversely although none of us has common borders with Afghanistan. Therefore maintaining peace and stability in Afghanistan is of vital interests of both countries. Our relevant authorities already collaborated during the air evacuation operations after August 15th at the Kabul airport. Turkey and India have made immense contribution to Afghanistan during the last 20 years. We shall continue helping Afghanistan to recover from years of conflict and strife.