US and India are united in combating terror, says US President Donald Trump

Trump said, "The US and India are committed to working together to stop terrorists and to fight their ideology. For this reason, since taking office my administration is working in a very positive way with Pakistan to crack down on terror organisation and militants that operate on the Pakistani border." 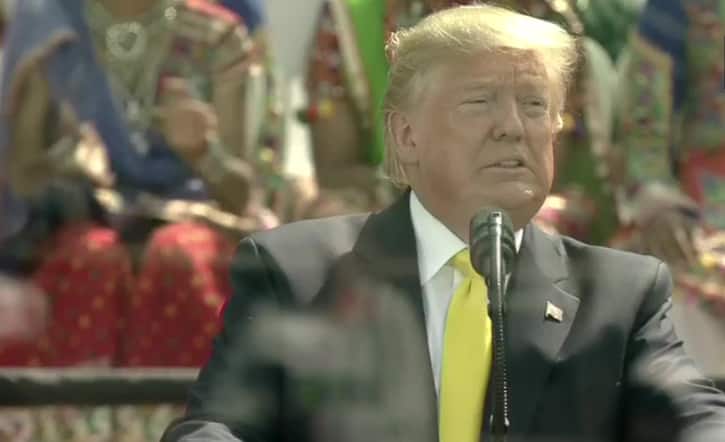 New Delhi: US President Donald Trump on Monday (February 24) spoke out against terrorism in his address and said, "Both our countries are hurt by the turmoil of terrorism... Today the ISIS caliphate has been 100% destroyed, Monster Al Baghdadi is dead."

Trump said, "The US and India are committed to working together to stop terrorists and to fight their ideology. For this reason, since taking office my administration is working in a very positive way with Pakistan to crack down on terror organisation and militants that operate on the Pakistani border."

He said, "Our relationship with Pakistan is a very good one. Thanks to these efforts we are beginning to see signs of big progress with Pakistan and we are hopeful for reduced tensions, greater stability and the future of harmony for all of the nations of South Asia."

Addressing thousands of people at the Motera stadium in Ahmedabad with a 'namaste', the US President said that the two countries will seal defence deals worth $3 billion on Tuesday.

Trump said, "I'm pleased to announce that tomorrow our representatives will sign deals to sell over US$ 3 Billion, in the absolute finest state of the art military helicopters and other equipment to the Indian armed forces."

The US President further said, "As we continue to build our defence cooperation, the US looks forward to providing India with some of the best and most feared military equipment on the planet. We make the greatest weapons ever made. We make the best and we are dealing now with India."

He also praised India’s “remarkable hospitality”, and said, "PM Modi started out as 'tea wallah', he worked as a tea seller. Everybody loves him but I will tell you this, he is very tough.”

"Today I say to all Indians to take pride in the glories of the past. Unite for the future and let our nations come together for freedom and its values. God bless America, God bless India. We love India very much," he said in the closing speech.

President Trump also gave special shout out to Sachin Tendulkar, Virat Kohli in his address. He said, "All over the planet people take great joy in watching Bollywood films, bhangra, and classic films like DDLJ and Sholay. You cheer on great cricketers like Sachin Tendulkar and Virat Kohli."