On Tuesday, the ministry of consumer affair had held a meeting wherein several decisions were taken to curb the problem of rising onion prices in the country and it also directed states to take quick action on the matter. 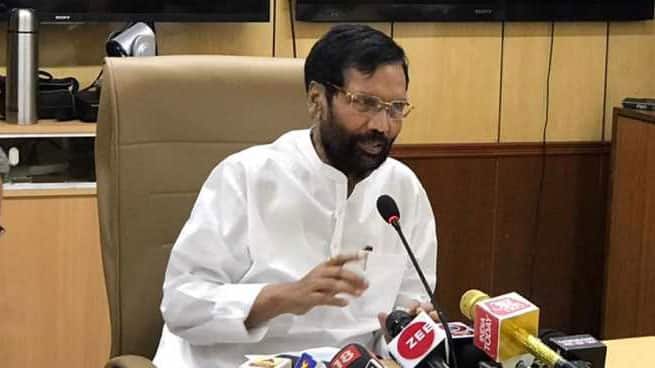 New Delhi: Union Minister of Consumer Affairs, Food and Public Distribution Ram Vilas Paswan on Wednesday, said that onion production is reduced to 30-40 percent due to bad weather conditions and heavy rainfall at several places, affecting the gap between demand and supply.

Addressing media persons after holding a meeting with deptartment officials on rising onion prices, he said that the bad weather conditins have affected the production of onion crop. ''Generally, the prices of onion go down during the month of November but this year the situation is contrary'' he added.

Paswan also said, ''We have taken the required steps by keeping buffer stock to avoid sudden increase in the rates of onions.'' He also informed that the government had kept 57000 quintals of onion as buffer stock. Few states purchased it and a part of the stock decayed after being stored for long.

The government is now left with the buffer stock of merely 15000 quintals of onion.

Talking about importing onions, the minister said, '' We are considering to import onions from other countries but that can only be done when the prices are lower there. We are holding talks through Ministry of Foreign affair in this regard.''

Paswan also sought suggestions from people for short term or long term solution to the problem, adding that he has directed the ministry to keep a check on hoarding.

On Tuesday, the ministry also held a meeting wherein several decisions were taken to curb the problem of rising onion prices in the country and it also directed states to take quick action on the matter.