Bigg Boss 11, Day 4 update: It's Shilpa-Arshi Khan vs rest of the house

The Day 4 inside BB 11 house was full of spice and drama! 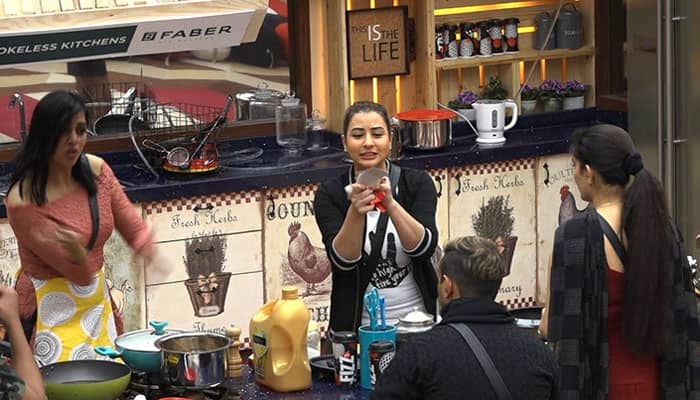 New Delhi: The much-loved and talked about reality show, Bigg Boss season 11 is creating waves ever since it kickstarted. Reason? Oh, well, there are aplenty. We have not 14 but 18 contestants this year plus there is a padosi theme running and the inmates are a little over-the-top.

So, on Day 4, the show started with occult practitioner Shivani Durga creating a sense of fear amongst all the housemates as during the previous night she was seen chanting some mantras and looking dead focussed on Shilpa (who btw was sleeping). Other inmates were so freaked out that they left the room one-by-one while in a moment of flicker Shilpa got up too and made a straight eye contact with Shivani—leaving everyone a bit amused.

Next morning, the buzz was about Shivani di or Mata ji ( as they call her) trying to influence Shilpa through her power. But on the other hand, Shivani was seen in a rather pensive mood and even talked her heart out to the BB 11 cameras. The padosis called up and wanted Shilpa to make the same Aloo Ki Sabzi for them, so the Bhabhi ji happily obliged and was seen cooking along with Arshi giving her company.

But, apparently, this left Shivani miffed as she didn't want to cook with any of these around. It was her turn to cook so a bit of an altercation ensued between the ladies which was joined by Hina Khan and Zubair Khan.

Suddenly, Arshi and Shilpa were gheraoed by other inmates and the fight became over-the-top. Zubair hurled abuses at Arshi and she, in turn, laughed it off in front of the camera.

The inmates couldn't win the luxury budget task and it went to the padosis happily, who were seen trying to get into their story characters. The highlight of the show remained Shilpa and Arshi, who are turning thick friends.

More drama to follow this night, keep reading this space for more.