Seer Sree Shivakumara Swamiji of Siddaganga Mutt, who died at the age of 111, was also known as the Walking God. 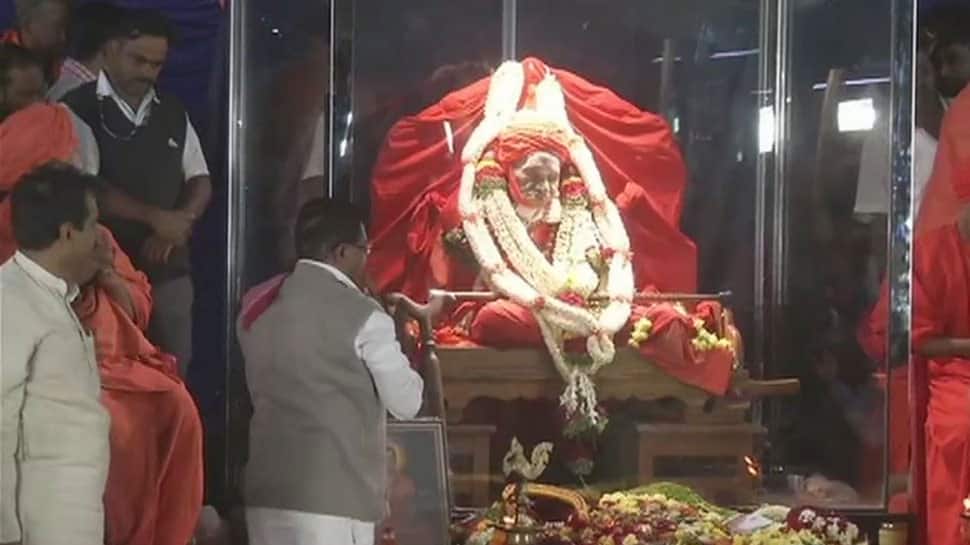 BENGALURU: Lakhs of people on Tuesday bid a tearful adieu to their "Walking God" as the mortal remains of 111-year-old Sree Shivakumara Swamiji of Siddaganga Mutt was laid to rest with fullstate honours at the premises of the seminary he headed for over seven decades.

The most revered saint, who left an indelible imprint with his stellar contributions in the education sector and philanthropy targeted at children in whom he saw the Almighty,was buried as "Kriya Samadhi", according to Veerashaiva/Lingayat traditions, amid chanting of hymns.

Known as "trivida dasohi" for his triple sacraments -food, shelter and education - among his followers, the Swamiji, who passed away on Monday,was buried in a sitting posture at the Samadhi with cakes of viboothi (sacred ash), salt, sand, bilva leaves (Aegle marmelos) and rudrakshi, among other things.

Preparations and rituals for the burial ceremony began since morning at the place, which, according to sources, was notified by Shivakumara Swami himself.

The pontiff had also recorded the procedures that needed to be followed for his last rites, according to his successor and junior pontiff of the mutt, Siddalinga Swamiji.

Earlier speaking to reporters, the junior swami had said that the last rites would be performed according to the swami's wish.

"He has written about it. He had expressed a desire that the last rites have to be performed as done to his guru (Uddana Shivayogigalu)," Siddalinga swamiji said.

The mortal remains, placed in a "Rudrakshi Mantapa" (chariot made of rudrakshi),was carried from the ground where it was kept for public view to the final resting place (Gadduge) in a procession, amid chanting of slogans by disciples in praise of their revered guru.

The crowd also shouted slogans demanding that 'Bharat Ratna" be conferred on the seer.

Earlier in the day, lakhs of people thronged the mutt to pay their last respects to the seer, whose mortal remains were placed in a glass box at Gosala Siddeshwara stage in the mutt premises since Monday.

According to mutt sources, Swamiji had wished to enter "Sajeeva Samadhi" (giving up life by entering one's own grave) on attaining 100 years of age, but gave it up due to legal reasons and pressure from his followers.

Following the path laid down by their guru, the mutt provided food as "prasad" to thousands of devotees who thronged the area to pay their respects.

Though shops and establishments remained closed in Tumkuru and surrounding areas as a mark of respect, many civilians, as also hotels and restaurants, distributed food free of cost to devotees and the needy by setting up food counters at various places.

The Chief Minister and most of his cabinet colleagues and also the leader of the opposition, Yeddyurappa, had camped in Siddaganga since the morning.