Friday marks the last day of campaigning for the seventh and final phase of Lok Sabha election 2019. 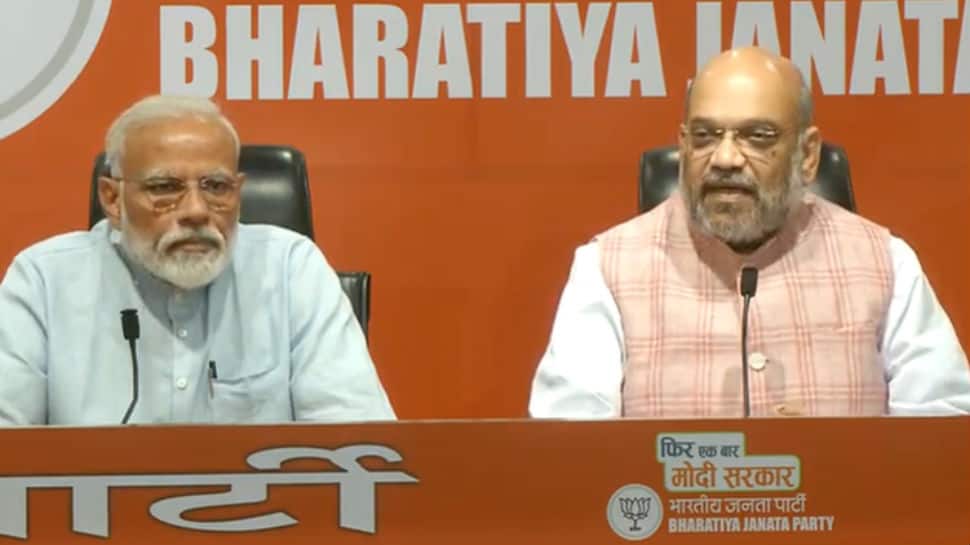 As Friday marks the last day of campaigning (except West Bengal) for the seventh and final phase of Lok Sabha election 2019, political parties across the country are leaving no stone unturned in their attempts to woo the voters.

Today, PM Modi addressed a rally in Khargone, Madhya Pradesh. He was also supposed to go to Kashi today. However, the visit later got cancelled. In the evening, PM Modi and BJP president Amit Shah will address party workers in Delhi.

On Thursday, West Bengal saw a series of rallies at different places by Prime Minister Narendra Modi and Chief Minister Mamata Banerjee as the election campaign in the state ended in the night due to Election Commission's order.

Stay with us for live updates on the election from the last day of campaigning:

#A polling team in Himachal Pradesh has reached World's highest polling station at Tashigang in Lahaul-Spiti, a part of Mandi Parliamentary constituency. The polling station is located at an altitude of 15256 feet above sea level

#EC suspends ferry services in North 24 Parganas district from tomorrow 8 pm to May 19th 8 pm in the wake of the last phase of polls.

#Polling parties in Mandi leave for their respective polling stations; all 4 Parliamentary constituencies of Himachal Pradesh will go to polls in the 7th & last phase of #LokSabhaElections2019 tomorrow

#Andhra Pradesh CM N. Chandrababu Naidu after meeting with Election Commission has ordered re-polling at 5 polling stations of Chandragiri AC & Chittoor PC after 25 days, they have to address all grievances simultaneously, they have to take proper action.

#Campaigning for 7th phase of 2019 Lok Sabha Election ends, 59 constituencies to vote on May 19.

#We'll perform good in North-East, very good in West Bengal. We'll do good in Odisha & there will be an improvement in the number of seats in all the states in the South. We'll improve in Maharashtra also: Amit Shah said.

#Pragya Thakur's candidature is a 'satyagrah' against a fake case of fake Bhagwa terror. I want to ask Congress, some people were earlier arrested in 'Samjhauta Express' who were related to LeT.A fake case of "bhagwa terror" was made in which accused have been acquitted: Shah said.

#80 BJP workers have been killed in one and a half years. What does Mamata Banerjee has to say about this? If we were responsible for this, why violence didn't take place anywhere else: Shah questions Mamata Banerjee about violence in Bengal.

# Party has served her a show cause notice and asked her to reply within 10 days. After she files a reply, the party's disciplinary committee will take appropriate actions: Shah on Sadhvi Pragya's controversial ''Nathuram Godse a patriot'' remark.

# In the last 2 elections, even IPL couldn’t be held. When the government is strong, IPL, Ramzaan, school exams and others take place peacefully: PM

# This is PM Modi's first press conference in five years in India.

# It will happen after a long time in the country, our Government will come to power with an absolute majority for the second consecutive time: PM Modi.

# For me, the election campaign has been a way of thanking the people of this country: PM

# Elections are a big challenge for the poll panel and the media: PM

# It has been an excellent campaign so far: PM

# PM Modi is now addressing the media at the BJP headquarters now.

# We are confident that we will get more than 300 seats: Shah

# We are confident that we'll receive good results: Shah

# We started our election campaign from January 16. Our target was to win 120 Lok Sabha seats which we couldn't win the last time: Shah

# Rahul says the media grills him with tough questions but asks PM Modi about what he eats and mangoes.

# Rahul claims the election schedule was finalised keeping in mind the programme of PM Modi.

# Rahul Gandhi says the decision on alliances and PM candidate will be taken after results are announced on May 23.

# Rahul Gandhi takes a dig at PM Modi, says I have heard that 'he is accompanying Amit Shah'.

# Rahul Gandhi too is addressing a press conference at Congress head quarters.

# Dear friends, we are fortunate to have PM Modi in this press conference today after hectic campaigning: Shah

# PM Modi is also expected to be present during the press conference.

# Rahul Gandhi will brief the media at 4:15 pm Congress headquarters in Delhi.

# I finally got it. The BJP and the RSS... Are not God-Ke Lovers. They are God-Se Lovers: Rahul Gandhi tweets

I finally got it. The BJP and the RSS...

# You have made the 'biggest actor' our PM, instead you could have chosen Amitabh Bachchan: Priyanka Gandhi

# PM Modi to meet BJP workers as part of the Lok Sabha campaign, later today at BJP office in Delhi.

# Till Modi and BJP are there, nobody can touch the land of those living in forests: Modi assures tribals

#  PM Narendra Modi in Khargone,Madhya Pradesh: This Sunday when you go to cast your vote then you will be scripting history. After decades you will elect a majority govt for a second time in a row pic.twitter.com/hOFV3ms6Up

# Amarinder Singh: All ministers and MLAs have been made responsible for the Congress party’s performance in the state and he shared the responsibility with them, he said, adding that he was ready to take the same responsibility for the state but was "confident of a sweeping victory for the party in Punjab."

# Sadhvi Pragya Singh Thakur hospitalised in Burhanpur, hours before she was to hold an election campaign for Nand Kumar Singh Chauhan.

# Tejashwi speaks on brother Tej Pratap being upset with him: I don't know anything about it. We have addressed joint rallies at several places

# People in Mahagathbandhan will shut their mouths after the election: BJP's Ravi Kishan

# Arvind Kejriwal to hold a roadshow in Patiala.

# On Tamil Nadu minister's "chop his tongue comment," Kamal Haasan said that it "shows the minister's qualities." "what can I say?" he added.

# Kamal Haasan on stones thrown at his rally in Trichy: I feel the quality of polity is going down. I don't feel threatened. Every religion has their own terrorist, we cannot claim that we are sanctimonious. History shows that all religions have their extremists. #Chennai pic.twitter.com/R7buqXnUBU

# Kamal Haasan on protest over his Godse remark: I am not afraid of being arrested. Let them arrest me. If they do that it will only create more problems. It is not a warning but only an advice.

# Ministers from the Modi cabinet are likely to arrive in Kashi today.

# Preparations are in full swing for PM's rally in Khargone. To brave the heat, air-conditioned platform has been built. There will also be an arrangement of drinking water for the people who take part in the rally.

Thank you for joining us. Do come back again on Saturday (May 18)  for live updates of Lok Sabha election 2019.