Flood situation in parts of Uttar Pradesh, Bihar and Madhya Pradesh continues to remain grim with major rivers flowing above danger mark in these states. 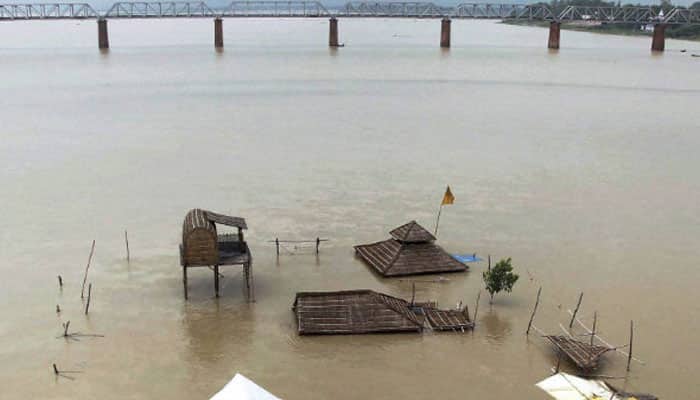 Lucknow: Flood situation in parts of Uttar Pradesh, Bihar and Madhya Pradesh continues to remain grim with major rivers flowing above danger mark in these states.

According to reports, at least 20 people have been killed in rain-related incidents in Madhya Pradesh during the past 24 hours.

While in Bihar, the state government has asked those living in low-lying areas to move to safer places as river Ganga is rising at a speed of 2 centimetres per hour.

According to Central Water Commission, Ganga is flowing two metres above the danger mark at Gandhi Ghat in Patna. Besides Ganga, Sone, Gandak and Saryu rivers are also flowing above danger mark.

In Uttar Pradesh, over a dozen districts are reeling under flood as main rivers including Ganga and Yamuna are flowing above the danger mark at different places.

Heavy rain and flood in neighboring states have worsened the situation in eastern districts and Bundelkhand region.

Rising Ganga water entered in some more areas in the city and also made about 20 more villages as flood affected during last 24 hours.

Allahabad district administration said that 135 villages of different areas are facing grim flood situation due to current spate in rivers. About seven thousand people have shifted in different relief camps.

In Banda, Ken River is on spate and flowing nearly five meter above the anger mark. Several areas are submerged under flood water in the district.