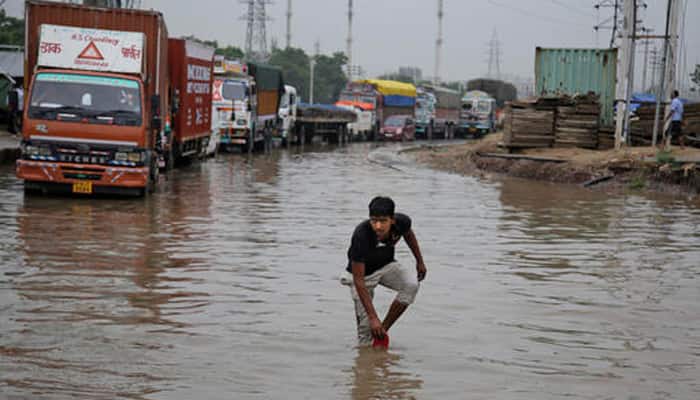 New Delhi: After witnessing heavy traffic jam for more than 12 hours on the Delhi-Jaipur highway due to waterlogging, Gurugram is limping back to normalcy on Friday.

The Gurgaon Police posted some pictures at noon, which show that the traffic condition was improving in some areas.

The Delhi-NCR region came to a standstill Thursday evening due to monsoon showers and excessive flooding caused by overflow in Badshahpur drain.

The NHAI team will coordinate with state officials to clear vehicular movement. The chairman will report about the developments to Gadkari.

Thousands of office goers and other commuters were today stranded in Gurgaon as heavy rains led to waterlogging on National Highway-8 causing massive traffic jams. Many motorists abandoned their vehicles and waded through knee-deep water which accumulated on both the carriageways of Delhi-Jaipur road, including Hero Honda Chowk, bringing traffic to a standstill with the tailback extending up to 15-20 kilometers.

Subhash Chowk at 11:42am pic.twitter.com/SbNGgNNtCr

The situation was so worse that the Gurgaon police today morning advised people coming from Delhi not to come to Gurugram to avoid being stuck in traffic jams due to flooding on roads.

29-Jul
People coming to Gurgaon from Delhi are advised to stay back today to avoid being stuck in Traffic Jams due to flooding on roads.

The authorities have ordered all the schools to remain close for two days.

Mr. @ArvindKejriwal should be asked this.Frustrated by non-cooperation by Delhi Govt,we have got it declared as NH. https://t.co/LUJGj9lSwT

Hero Honda Chowk on National Highway 8 continues to remain flooded and the traffic police are not allowing heavy vehicle to pass from there. Traffic along the NH8 from Delhi to Rajiv Chowk is moving very slowly, says Gurgaon Police.

Breakdown vehicles removed from Hero Honda Chowk on NH8 which is still flooded. Now allowing heavy vehicle to pass from there.

In order to help the commuters, Gurgaon Police is regularly giving traffic updates on their official twitter account.

People, who were said to be stuck in the traffic jam for 6-7 hours last night, vented out their anger on the administration.

However, many commuters had some good words for the Gurgaon Police saying.

Changing the name to Gurugram did not solve #Gurgaon problems. Maybe we should change the std code next time. pic.twitter.com/lH1WTj3JgV

Traffic jam all around in gurgaon but the efforts made by @gurgaonpolice ....commendable .The state of infrastructure is such a downfall..

#Respect for the police person on the ground ! @gurgaonpolice Great Job guys.. https://t.co/5XfkPN7h7j