Various Opposition parties on Monday held a countrywide protest on what they call the government's mishandling of the currency ban. 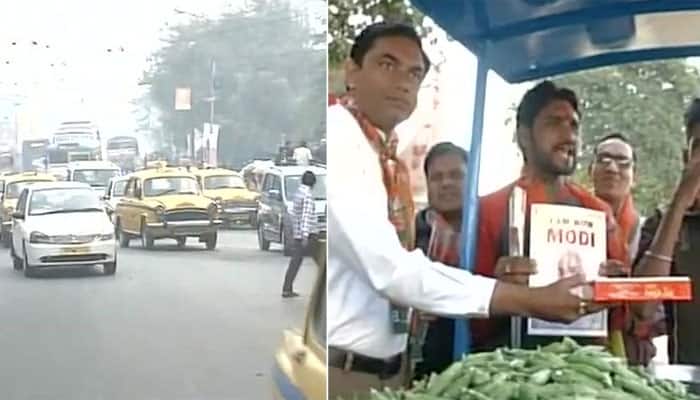 New Delhi: Various Opposition parties on Monday held a countrywide protest on what they call the government's mishandling of the currency ban.

The Congress, Trinamool Congress (TMC) and Aam Aadmi Party (AAP) said that while they do not support the all-India shutdown (Bharat Bandh), they will continue their protest in Parliament and on the streets against the BJP-led central government's demonetisation policy.

Only the Left Front, which has its presence in Kerala, West Bengal and Tripura, called for a 12-hour bandh in these three states.

Early today, several Samajwadi Party workers held a demonstration and burnt effigy of central government in Allahabad against the implementation of the demonstration policy.

In West Bengal, the 12-hour band called by the Left evoked lukewarm response as train and flight movement in the state remained normal with most vehicles hitting the streets, and markets and shops remained open.

Normal life remained crippled in Left-ruled Tripura and Kerala due to the shutdown call as all government and semi-government, private offices, banks, educational institutions, shops and business establishments remained closed. All types of vehicles, except security forces too remained off the roads.

Train services between Tripura and rest of the country were affected due to the shutdown.

A meeting of all the opposition parties, barring JD(U), was held in the chamber of Leader of Opposition in Rajya Sabha Ghulam Nabi Azad in Parliament House here and it was decided that the protests will continue till their demands are met, PTI sources said.

The opposition parties have been divided over the ways to protest against demonetisation ever since Trinamool Congress chief Mamata Banerjee decided to march to the President against it.

While she was joined by AAP, National Conference and Shiv Sena, an NDA ally, other opposition parties stayed away.

Shiv Sena has backed demonetisation but said it is unhappy over the way it was causing problems to people.