India, Iran and Afghanistan on Monday inked the Chabahar trilateral port agreement in the presence of premiers of all the three nations to set up trade and transit corridor. 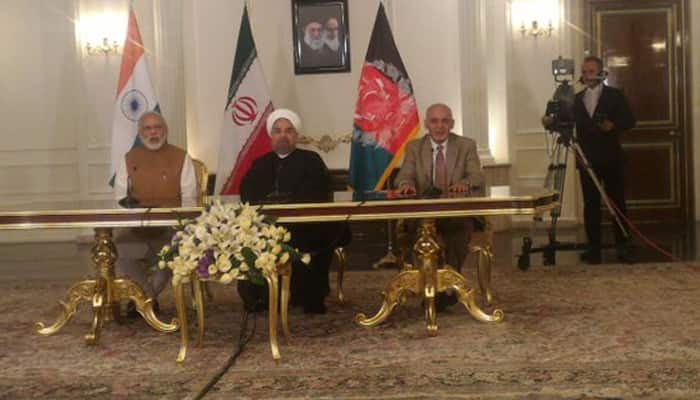 Tehran: In a history of sorts, India, Iran and Afghanistan on Monday inked the Chabahar trilateral port agreement in the presence of premiers of all the three nations to set up trade and transit corridor.

Hailing the signing of the agreement, Prime Minister Narendra Modi called it 'historic'.

"Today, we are witnessing a creation of history... Not just for the people of our three countries, but for the entire region,” Modi said in a joint media conference with Rouhani and Ashraf Ghani following the signing of the trilateral agreement between India, Iran and Afghanistan.

President @ashrafghani:100 years from now historians will remember this day as the start of regional cooperation pic.twitter.com/EEfU38AgyO

Meanwhile, India and Iran also signed 12 agreements, including on science and technology, culture and railways and three on the port itself.

On Monday he described the signing of the trilateral Chabahar port agreement as creation of history even as India and Iran signed 12 bilateral agreements.

"The agenda for economic engagement is a clear priority for us. We stand together in unity of our purpose," Modi said.

Pitching to carve out "new routes of peace and prosperity" of the three countries, Modi said: "It is our common goal. We want to link with the world."

The prime minister said the Chabahar transport and transit corridor "would spur unhindered flow of commerce throughout the region".

“The key arteries of the corridor would pass through the Chabahar port of Iran.”

He said Afghanistan would now get an assured, effective, and a more friendly route to trade with the rest of the world.

“Our present growth and future prosperity is under threat from the spread of radical ideas and physical terror,” he said.

He said the Chabahar corridor would be a "corridor of peace and prosperity for our peoples”.

On his part, President Rouhani said that through this agreement, Tehran, Delhi and Kabul have sent the message that the path of progress can be achieved through cooperation and utilisation of regional resources.

“With our joint investments in Chabahar, we can connect India with Afghanistan, Central Asia and the CIS countries,” he said.

Speaking on the occasion, Afghan President Ghani said Asia was changing and it was moving towards being an economic continent.

Earlier on Monday, following the signing of the 12 agreements after delegation level talks, Modi described India-Iran friendship as "as old as history".

“Through centuries, our societies have stayed connected through art and architecture, ideas and traditions, and culture and commerce,” he said.

Stating that he was impressed by Rouhani's leadership and the clarity of vision, Modi said that Monday's talks between the two countries focused on the full range of bilateral engagement.

“The agenda and scope of our partnership is truly substantial. The outcomes and agreements signed today open a new chapter in our strategic partnership,” he said.

The prime minister also said that India and Iran shared a crucial stake in peace, stability and prosperity of the region.

“We also have shared concerns at the spread of forces of instability, radicalism and terror in our region,” he said.

Modi also attended the inauguration of a two-day conference titled "India-Iran Two Great Civilisations: Retrospect-Prospects" organised by the Indian Council for Cultural Relations (ICCR) in collaboration with the Indian embassy in Tehran, Bonyad-e-Sadi, and Farhangistan-e-Zaban-o-Adab-e-Farsi.

“Centuries of free exchange of ideas and traditions, poets and craftsmen, art and architecture, culture and commerce have enriched both our civilisations,” Modi said in his speech.

“The richness of Persian heritage is an integral part of the fabric of the Indian society.”

Referring to a rare manuscript called “Kalileh-wa-Dimneh” containing the Persian translation of tales from the Jataka and the Panchatantra which he released ahead of his speech, he said it captured the close historical links between India and Iran.

“It is a classic example of exchange and travel of cultural ideas between two societies. A beautiful demonstration of how our two cultures and countries think alike,” he said.