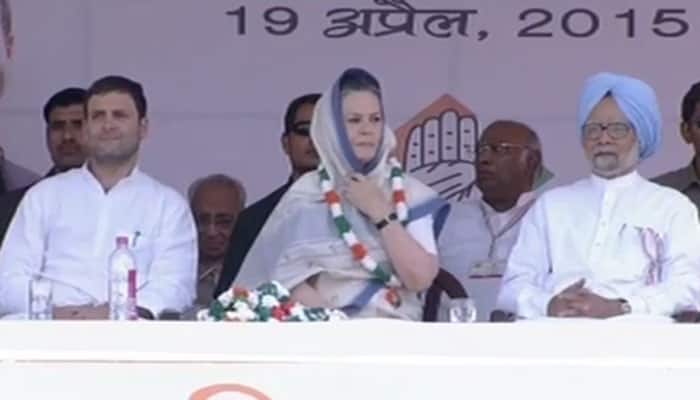 There is a difference between what the government says and actually does, says Sonia Gandhi.

The Gandhi scion, who went on a 56-day long sabbatical, was accompanied by his mother and Congress supremo Sonia Gandhi and other prominent leaders of the party.

On Saturday Rahul and Rajasthan PCC Chief Sachin Pilot had met a delegation of farmers from Uttar Pradesh, Haryana, Rajasthan, Punjab and Madhya Pradesh and sought their views on the changes being brought in UPA's land law by the Narendra Modi government.

A senior party functionary said that besides the rally, Rahul will also be speaking in the Lok Sabha and is expected to take on the government after the second part of the Budget session begins on Monday.

The delegation included farmers from Bhatta Parsaul village from where Rahul had launched a "padyatra" in 2011 against forcible land acquisition of farmers, a protest that had culminated in passage of Right to Fair Compensation and Transparency in Land Acquisition, Rehabilitation and Resettlement Act, 2013.

"Rahul told farmers that he will fight a decisive battle on the issues facing them. He said that Congress will not let this fight be over in a day, a month or an year. He said that he will force the government to bow down before the farmers and he will take the fight to a logical conclusion," party leaders said.

The farmers representative also sought time from Rahul to meet again for a slide show and power point presentation on farmers' issues.

After the meeting, Rahul came out to meet hundreds of farmers waiting outside and interacted with them outside his residence for close to 40 minutes during which some of the farmers also showed him the crop damaged due to hailstorm.

Some of the old farmers were seen blessing him and hugging him as he reached out to them amid tight security.

Rahul did not speak to the large media contingent parked outside his residence.

Asked whether Rahul will raise the issue in Parliament, a Congress leader said, "Naturally. He is listening to the issues of farmers. Naturally these issues are raised. Rahul was not present during the earlier session as he was on leave. We apprehend that the Modi government will try to pass the bill to replace the land ordinance again in Lok Sabha and Rajya Sabha.

"That is why we kept the rally on the eve of the session. Rahulji strongly feels that that we will not allow farmers' interests to be compromised," Ahmed said.

Meghalaya plea to tribunal for upholding ban against HNLC

DNA: When poisonous gas leaked in Bhopal in 1984

DNA: Who is the 'mastermind' of anti-Brahmin slogans in JNU?