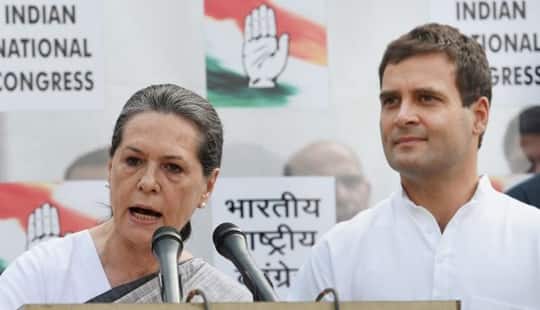 The Patiala House Court issued summons to Sonia and Rahul to appear before it on August 7.

Metropolitian magistrate Gomati Manocha, while issuing the summons, said: "I have found prima facie evidence against all the accused. The court has directed them to appear before it on August 7."

The summons were issued on a private complaint filed by BJP leader Subramanian Swamy.

The National Herald newspaper was established in 1938 by India`s first prime minister Jawaharlal Nehru. It was shut down in 2008.

The case involves misappropriation of funds of the now-defunct newspaper.

Speaking to reporters after the court issued summons, Swamy said that Sonia and Rahul Gandhi`s signatures prove their involvement in the National Herald case.
"It is important for the court to take the passports of Sonia Gandhi and her son Rahul Gandhi so that they do not run away from the country before the hearing in the court," added Swamy.

Swamy said the case involves Rs 2000 crore worth of property belonging to the National Herald, which was grabbed by Congress leaders using fraudulent papers.

He claimed that the party had even given Rs 90-crore loan to the newspaper – an illegal transaction as a political party cannot loan money.

This is a case of fraud and breach of trust, and the duo can be sentenced to anywhere between seven years and life term, the BJP leader said.

Rahul Gandhi had threatened to file defamation case against Swamy when he first made the allegation in 2012. Rahul had described the charges as "scandalous abuse" and "as utterly false, baseless and defamatory".

Reacting to the development, the All India Congress Committee (AICC) said in a statement: “In the National Herald matter the persons named have not received any papers or information from the court so far. They will seek legal advice and do the needful.”