Astronomers have found what may be the largest feature in the known universe: a ring of nine gamma ray bursts and hence galaxies - five billion light years across. 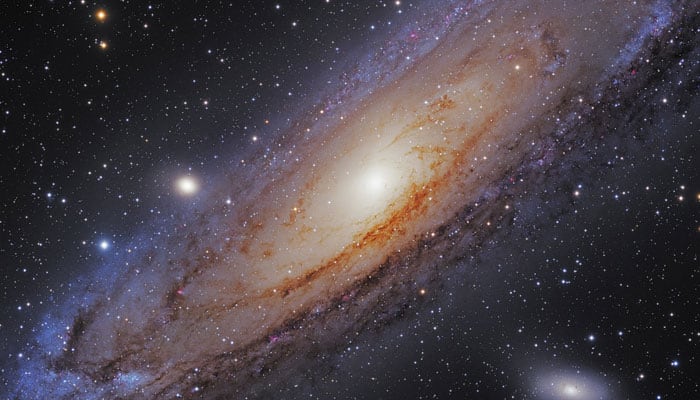 Washington: Astronomers have found what may be the largest feature in the known universe: a ring of nine gamma ray bursts and hence galaxies - five billion light years across.

Gamma-ray bursts (GRBs) are the most luminous events in the universe, releasing as much energy in a few seconds as the Sun does over its 10 billion year lifetime.

They are thought to be the result of massive stars collapsing into black holes. Their huge luminosity helps astronomers to map out the location of distant galaxies.

The GRBs that make up the newly discovered ring were observed using a variety of space- and ground-based observatories.

They appear to be at very similar distances from us - around 7 billion light years in a circle more than 70 times the diameter of the full Moon, researchers said.

This implies that the ring is more than 5 billion light years across.

There is only a 1 in 20,000 probability of the GRBs being in this distribution by chance, said Professor Lajos Balazs of Konkoly Observatory in Budapest who led the Hungarian-US team of astronomers which made the discovery.

Most current models indicate that the structure of the cosmos is uniform on the largest scales. This 'Cosmological Principle' is backed by observations of the early universe and its microwave background signature.

Other recent results and this new discovery challenge the principle, which sets a theoretical limit of 1.2 billion light years for the largest structures. The newly discovered ring is almost five times as large, researchers said.

"If the ring represents a real spatial structure, then it has to be seen nearly face-on because of the small variations of GRB distances around the object's centre.

"The ring could though instead be a projection of a sphere, where the GRBs all occurred within a 250 million year period, a short timescale compared with the age of the universe," Balazs said.

A spheroidal ring projection would mirror the strings of clusters of galaxies seen to surround voids in the universe; voids and string-like formations are seen and predicted by many models of the cosmos.

The newly discovered ring is however at least ten times larger than known voids.

"If we are right, this structure contradicts the current models of the universe. It was a huge surprise to find something this big and we still don't quite understand how it came to exist at all" said Balazs.

The team now wants to find out more about the ring, and establish whether the known processes for galaxy formation and large scale structure could have led to its creation, or if astronomers need to radically revise their theories of the evolution of the cosmos.