Islamic State leader Baghdadi dead or not? No confirmation from US yet

This is not the first time that Islamic State leader Abu Bakr al-Baghdadi has been reported to have died in a coalition strike. 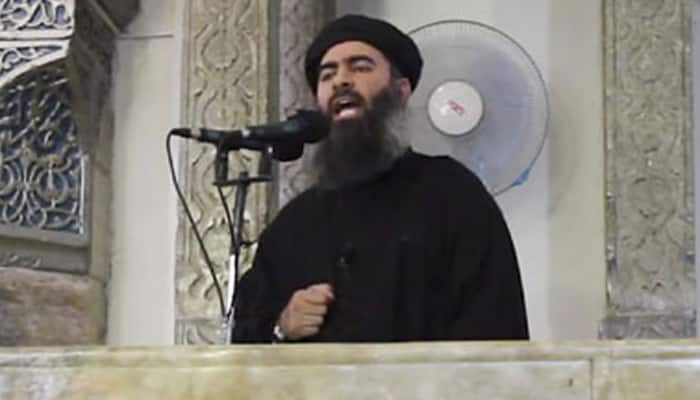 Rome/New Delhi: The US has not yet confirmed the death of Islamic State leader Abu Bakr al-Baghdadi, who was on Tuesday reported to have been killed in an American airstrike.

Italian news agency AKI cited a report by Islamic State-run Al-Amaq as saying that Baghdadi was killed in an air raid in Syria by the US-led coalition forces on Friday. The report about Baghdadi`s death was also corroborated by Iranian state media and pro-government Turkish daily Yenis Safak.

However, there was no confirmation from US officials about the death of the most wanted terrorist, nicknamed "the invisible sheikh", with a USD 25-million bounty on his head.

It said the statement in Arabic published by Amaq announced that "the commander of the faithful and caliph Baghdadi was killed by alliance airstrikes on Raqqa on the fifth day of Ramadan (Friday)".

Mirror.co.uk citing a statement from Iraqi security forces said Baghdadi`s convoy was hit "as it was moving towards Karbala (in Iraq) to attend a meeting of the Daesh terrorist leaders". But the British newspaper website citing a spokesman for the coalition said the terrorist leader`s death was not confirmed.

Colonel Chris Garver, of the coalition forces, said in an e-mail that he had seen the reports but had "nothing to confirm this at this time".

This is not the first time that Baghdadi has been reported to have died in a coalition strike. Such reports have emerged earlier as well.

On Monday, Iraqi TV channel `Al-Sumaria` said that Baghdadi had been wounded in a coalition airstrike on a location 65 kilometres west of the Islamic State-held city of Mosul.

CNN citing US defence officials said that they had received credible intelligence that Baghdadi has been on the move in the past six months and had travelled to Mosul recently.

Baghdadi, 45, has not released any audio or video statement in the last six months. An audio message was released in December 2015 from the dreaded terrorist leader who has orchestrated major attacks in Europe and massacres in the territory he governs. Since then he has maintained a stony silence with some reports saying he may have been dead since long.

Very little is known about the earlier life of Baghdadi and when he began his terrorist activities.

He is said to have been arrested from Baghdad in 2004 as a "civilian internee" with terrorists in Iraq. He was released later as a "low-level prisoner".