Sachin's five raid points and a collective effort from the team's defence helped Gujarat beat the home side in a tight encounter that had been billed as the repeat of season 6 final. 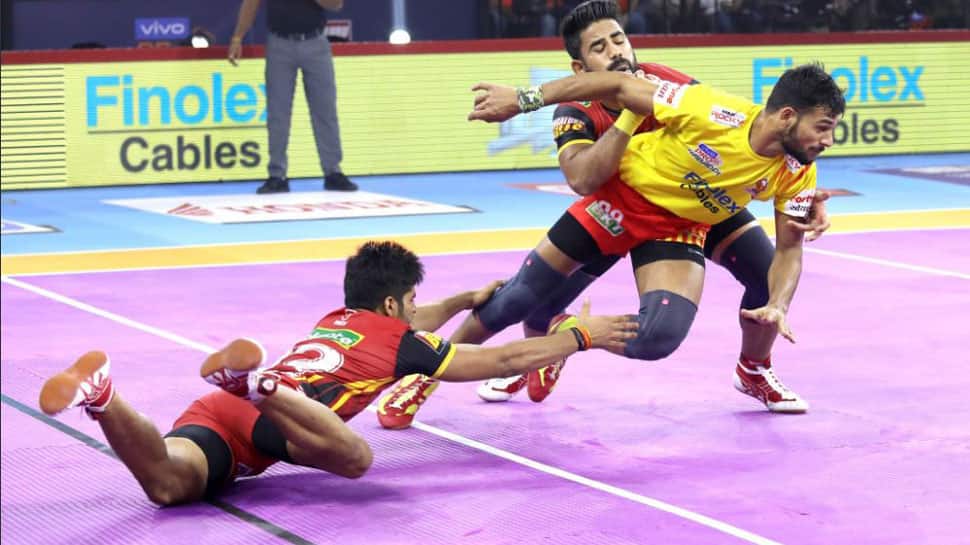 Gujarat Fortunegiants produced a composed performance to beat defending champions Bengaluru Bulls 32-23 in the opening match of the Pro Kabaddi League (PKL) ‘rivalry' week in front of a packed audience at the Sree Kanteerava Stadium, on Saturday.

Sachin's five raid points and a collective effort from the team's defence helped Gujarat beat the home side in a tight encounter that had been billed as the repeat of season 6 final. Importantly for Gujarat, the result catapulted them to sixth in the table.

Sachin was back in the line-up and it was Gujarat who started the match on the front foot with the team showing no signs of their bad form (went into the match with 7 losses in 8 matches).

Pawan Sehrawat was having an unusually quiet game for the Bulls but he worked well with skipper Rohit Kumar to keep pace with the Gujarat side in the first half. But a miscalculation from the Bengaluru defence, which saw both Mohit Sehrawat and Amit Sheoran go out of bounds, handed over the momentum to the Gujarat who piled on the pressure to force an All-Out on the home team in the 14th minute of the half and move to a four-point lead.

The Gujarat defence, especially Parvesh Bhainswal and Sumit Kumar, looked sharp in the first half that ended 18-12 with Gujarat in the lead.

The second half saw the match played on the defence as both sets of raiders to struggled to fetch points. Sumit Kumar was once again in the thick of things for Gujarat, pouncing on every opportunity to tackle Pawan Sehrawat.

Bengaluru's Saurabh Nandal was having a stupendous game in their defence too, rushing to a High 5 (awarded to defenders with 5 tackle points or more) in the mid-stages of the second half to set up an enticing final five minutes of the game.

The home side were playing on the Do-or-Die situations but Sachin pulled out a two-point raid with two minutes remaining to increase the lead to five points. Another blunder in Bulls' planning to led an All-Out in the final move of the match which meant Bengaluru squandered a chance to walk away with at least one point.

Karanjit Singh to double up as goalkeeping coach at Chennaiyin FC