PKL 7: Jaipur Pink Panthers off to winning start after beating U Mumba 42-23 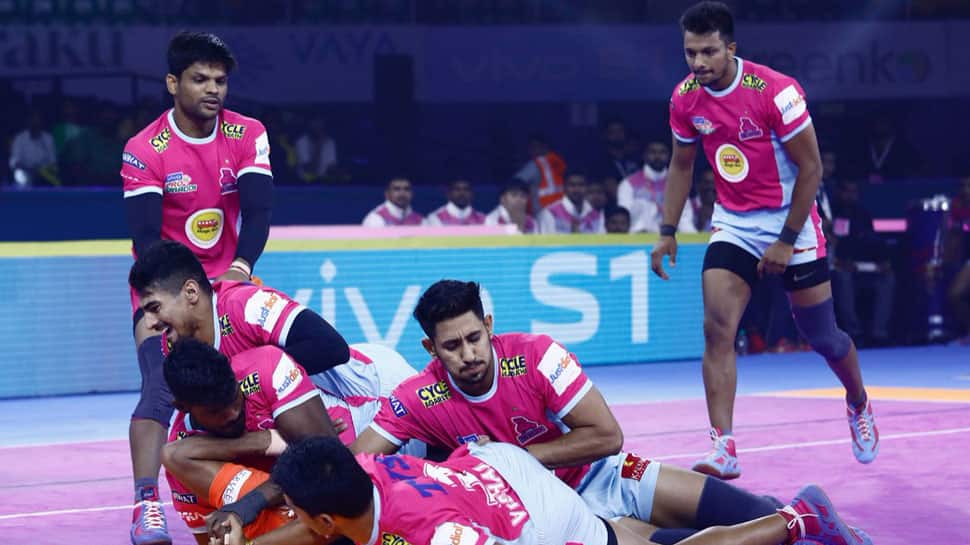 The Jaipur Pink Panthers got their campaign off to a winning start defeating U Mumba 42-23 in the fifth match of the seventh edition of the Pro Kabaddi League at the Gachibowli Indoor Stadium in Hyderabad.

Raiders Deepak Hooda, Nitin Rawal and Amit Hooda were vital contributors for the Pink Panthers chipping in a super 10, six and seven points respectively. Amit Hooda, on the other hand, made his presence felt in the heart of the defence for the franchise, putting the opposition raiders under pressure.

This lethal combination of aggressive gameplay and astute defending helped the Jaipur Pink Panthers defeat U Mumba who were high on confidence following a win in their opening clash against the Telugu Titans.

The Pink Panthers were further helped by an underwhelming performance by the usually reliable U Mumba defensive unit, who managed to score just five tackle points.

Deepak Hooda helped his side register a strong start to the clash accounting for three points in two raids. The Pink Panthers further built on this start to complete an all-out in the seventh minute, with U Mumba trailing 10-2 on the scoreline.

The Panthers' raiders kept scoring points at will increasing the pressure on their opponents. U Mumba skipper Fazel Atrachali who has usually stepped up with a fine performance whenever his side under pressure, failed to get the job done accumulating just two tackle points.

The Jaipur Pink Panthers enjoyed a smooth sailing till the end of the first half where they led 22-9 against U Mumba. However, the second half was comparatively more competitive as raider Dong Geon Lee attempted to inspire a comeback alongside Abhishek Singh.

However, the Pink Panthers built on their early lead at half time with a composed performance. Hooda further tilted the clash overwhelmingly in favour of his side in the final five-seven minutes, bringing up a personal milestone as well following his first super 10 of this edition.