Interestingly, Bengaluru Bulls led by Rohit Kumar, had defeated Gujarat by 12 points in the first qualifier to directly book a place in the summit clash. 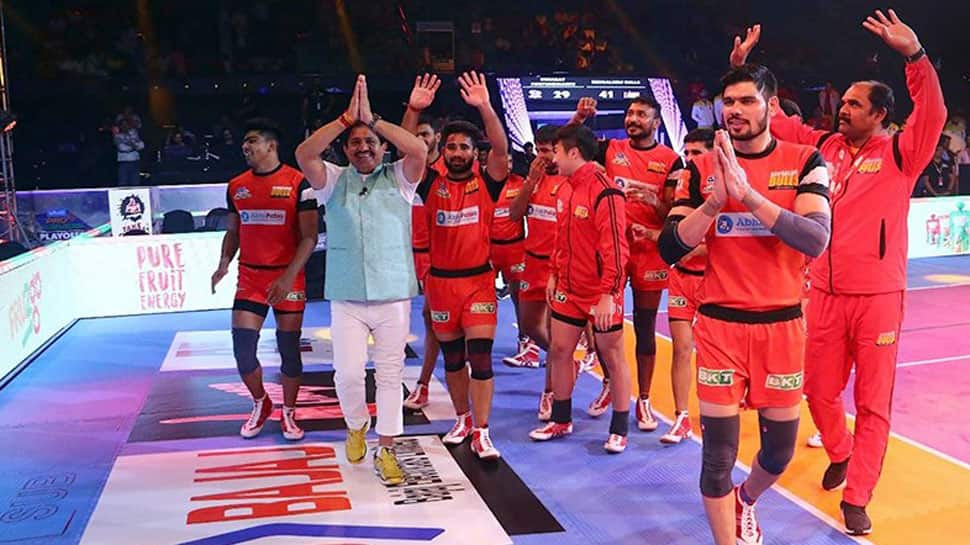 Last season's runner-up Gujarat Fortunegiants will clash with the Bengaluru Bulls in the final of the sixth season of the Pro Kabaddi League on Saturday.

Interestingly, Bengaluru Bulls led by Rohit Kumar, had defeated Gujarat by 12 points in the first qualifier to directly book a place in the summit clash.

Gujarat, on the other hand, led by Sunil Kumar overcame a resurgent UP Yoddha in the second qualifier on Thursday, to book a place in the final.

The two finalists have played thrice before with both sides winning a game each and one ending in a tie.

Gujarat will have their hopes pinned on star raider Sachin Tanwar, who has been consistent through the campaign.

He has averaged 8.2 raid points throughout the season and is amongst the top 10 raiders in the entire league. Even in the win against UP Yoddha, he played a key role clinching 10 points.

He will require support from other raiders mainly K Prapanjan, who has 118 points to his credit. But the two need to finish the game on a high.

Other Gujarat players Parvesh Bhainswal (84 points), skipper Sunil Kumar (72 points) and Rohit Gulia (56 points) will also have to compete at the best of their abilities if Gujarat have to clinch their maiden title.

On the other hand, Benguluru Bulls will have an added advantage as they had defeated Gujarat on Monday last and face the same opponents twice inside a week.

For the southern side, Pawan Kumar Sehrawat (260 points) and skipper Rohit Kumar (170 points) will have their task cut out against a strong Gujarat defence.

Rohit Kumar, skipper of Bengaluru Bulls said,"We will not let this opportunity go. We have reached the finals and the aim is to take the trophy home."

"We are focusing on strengthening our raiding and tightening our defence, because while Gujarat is a young team one cannot underestimate their gameplay."

"They have played well through the season and we will give them a tough fight in the finals," he added.

Meanwhile, Manpreet Singh, coach of Gujarat Fortunegiants, said: "Last year, we came very close to winning the trophy and this year we are better prepared."

Gujarat skipper Sunil Kumar said: "We have displayed immense team-work throughout the season and we are looking forward to lifting the trophy. In the last match against Bengaluru, we committed a few mistakes and those won't be repeated."

"We are tightening our defence, which will be a good support for our raiders to score points," he stressed.

An enthralling contest is expected to be on the cards and the winner will be richer by Rs 3 crore, while the runner ups take home Rs 1.80 crore.