Monu Goyat starred from Yoddha with 11 raid points to help the UP side seal a place in the playoffs. 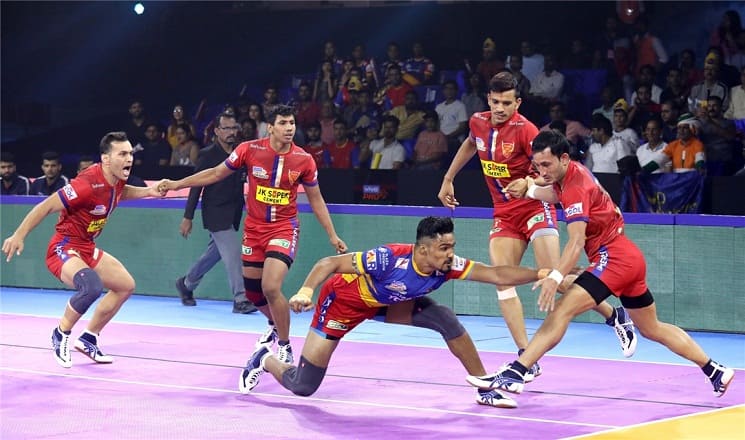 Monu Goyat starred from Yoddha with 11 raid points to help the UP side seal a place in the playoffs.

The Delhi team, with no Naveen Kumar, Ravinder Pahal and other experienced stars in their starting seven, offered very little resistance to a charged up Yoddha who were eyeing a victory to seal their playoff berth in front of their home crowd.

Monu Goyat picked up valuable raid points from the start as the UP side went on to secure their first All-Out in the sixth minute to move to a 5-point lead.

The story continued to be the same till the half time with Delhi's Meraj Sheykh being the only bright light in what was otherwise a toothless performance from the league's pace-setters. The first half ended 22-12 with Yoddha clearly in control of the game.

The home side picked up their second All-Out of the match two minutes after the restart as Monu Goyat picked up his Super 10.

The All-Out saw Yoddha open up a 13-point gap and there was no coming back for Delhi as the hosts piled up the pressure.

Nitesh Kumar picked up a High 5 as Yoddha continued to dominate the proceedings. They picked up another All-Out with under four minutes remaining to move to a 17-point lead which they comfortably defended.

The only positive for Delhi was the performance of Neeraj Narwal who secured a Super 10 in the closing stages to cap off a rare start.