The  'Little Italy' actress is obsessed with terrified looking dolls. 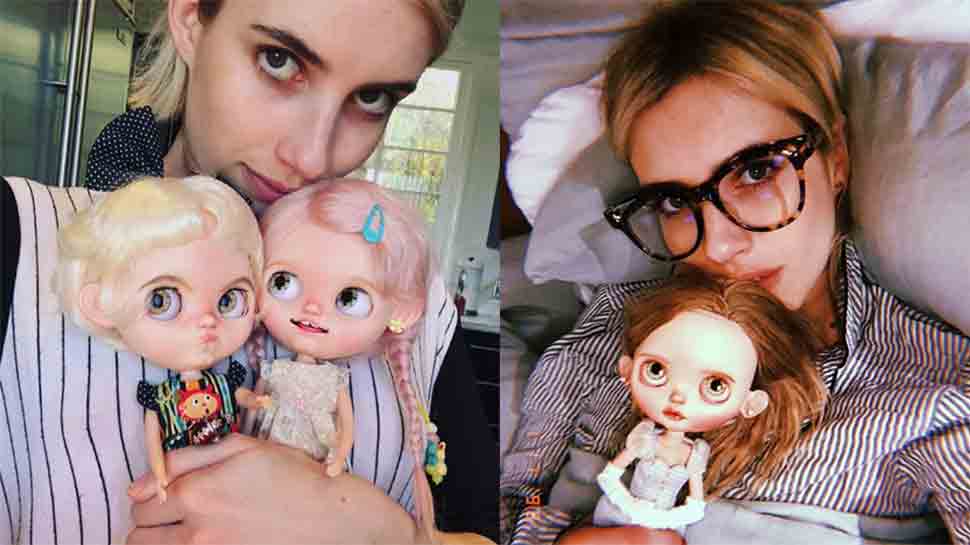 New Delhi: 'Little Italy' actress Emma Roberts, who is all set to turn 28 next month, is not at all a Barbie fan. Instead, she obsessed with terrified looking dolls. And the actress has opened up about her love of creepy dolls on Instagram.

Roberts posted a photograph of herself with a Blythe Doll on Instagram and wrote, "I got an early birthday gift and her name is Bloom! Who wants more doll content?" This is not the first time when Roberts has openly shown her love for scary-looking dolls.

I got an early birthday gift and her name is Bloom! _ who wants more doll content? _

In June last year, she posted a photo holding two of the toys against her chest with the caption, "Where my doll lovers at?"

Where my doll lovers at? _

Roberts even acknowledged her obsession for creepy dolls by posting an image of another type of doll. Alongside the photograph, she wrote, "The best sisters in the world @britelkin @kakeykake got me the best birthday gift in the galaxy. Thank you. My doll obsession continues."

And her love for creepy dolls is not new.

In 2015, she was on the hunt to expand her collection. "Who knows a place to get Blythe Dolls on the internet?" she tweeted in January 2015.

Who knows a place to get Blythe Dolls on the internet? Having an oddly difficult time finding....

The starlet, who is the niece of Hollywood megastar Julia Roberts, 51, had her big break when she starred in the Nickelodeon show Unfabulous at the age of 13.

The show aired for three years, between 2004 and 2007, and Emma went on to star in 2006 flick Aquamarine for which she won the Young Artist Award for her role as Claire Brown.

She also dabbled in the music industry and released her album Unfabulous And More in 2005.

Despite being busy, Emma enrolled and began her studies in Sarah Lawrence College in 2011, but a few months later revealed she had put her studies on hold to concentrate on work commitments.

Aside from acting, the Scream Queens actress co-runs Belletrist, an online outlet that gives monthly book and bookstore recommendations.

Next year the star will star in fantasy film Paradise Hills and animated comedy UglyDolls alongside Kelly Clarkson and Nick Jonas.

The blonde is currently loved-up with fellow actor Evan Peters, 31, who she met while filming comedy Adult World.