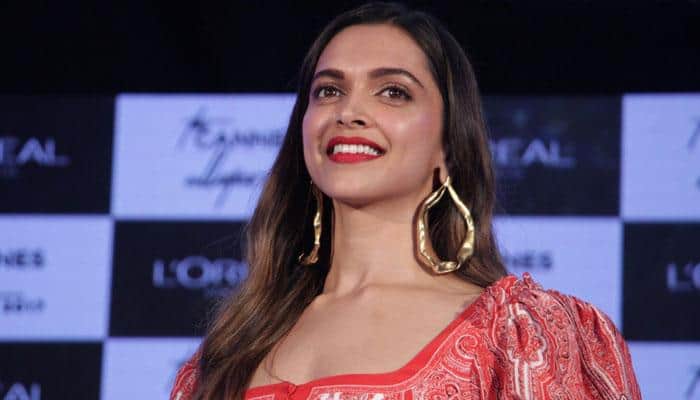 New Delhi: The beautiful and highly talented Deepika Padukone turns a year older today and Twitter is full of wishes already!  The year gone by has turned to be special for the dimpled beauty. From the epic success of 'Padmaavat' that released in January last year to taking the big step with her beau Ranveer Singh, the year 2018 has been big for Padukone.

While we await her husband, Ranveer's birthday wish, here is what Deepika's well-wishers have been posting on Twitter:

From fighting pay disparity in the industry to thrasing bigotry to stand up for her film despite death threats, from constantly breaking the glass ceilings and creating widespread awareness about mental health.
We stan a woman of SPINE and GRIT.#HappyBirthdayDeepikaPadukone pic.twitter.com/vQ2dmIPYyD

Happy Birthday to Ram’s Leela , Bajirao’s Mastani and Ranveer’s Deepika ! Wish You all the love and happiness #HappyBirthdayDeepikaPadukone pic.twitter.com/i6QxJFfujX

Happy birthday to this talented and utterly beautiful woman, who has never failed to inspire me with her courage and kindness. You are one hell of a woman @deepikapadukone. As I always say, the best is yet to come #HappyBirthdayDeepikaPadukone pic.twitter.com/9QeQaixybA

Even if it is for infinite times... I will not get tired sayingI LOVE YOU DEEPIKA PADUKONE #HappyBirthdayDeepikaPadukone pic.twitter.com/EVSK6cTOqC

From awkward initial phase to her turning into one of finest star-actors of our times, her onscreen evolution is just remarkable.

Also an activist, entrepreneur and now a producer who's bringing a relevant story to celluloid.
In short, an EMPRESS!#HappyBirthdayDeepikaPadukone pic.twitter.com/s1EZQg69sY

Still waiting for something to match Deepika’s beauty in Deewani Mastani . #HappyBirthdayDeepikaPadukone pic.twitter.com/Mb7Cxdz0Db

National Level Badminton player
Only actress with 7 movies in the 100+ crore club
Founded an NGO to bring awareness about mental health
Only woman to enter top 5 in forbes' richest Indian celeb list
Her brand AAY is worth 100cr+#HappyBirthdayDeepikaPadukone pic.twitter.com/TtUet2fR0k

Wishing our beloved queen @deepikapadukone a very very Happy Birthday Wish you all the very best in everything. All the happiness is always with you Indonesia Love you so much  #HappyBirthdayDeepikaPadukone @DeepikaPFC @dp1stday1stshow @DeepikaHolics pic.twitter.com/8nOAeXpl7W

Be it being the highest paid actress in the industry or not giving in to bigots and standing tall through a storm, your strength inspires us every single day. Here's to more milestones and breaking more glass ceilings @deepikapadukone #HappyBirthdayDeepikaPadukone pic.twitter.com/133krHYqaE

Deepika got married to long-time beau Ranveer on November 14 in a traditional Konkani style ceremony. A day later, the couple solemnized their wedding as per the Sindhi tradition and also shared their first pics as a married couple. 'Deepveer' looked straight out of the pages of a history book on their big day as both opted for regal outfits.

After their wedding, the couple hosted several wedding receptions which were attended by various high-profile guests.

Deepika and Ranveer's wedding was one of the most talked about in the year 2018. The 'Padmaavat' actors give us major relationship goals each day and make us believe in happily ever afters!

On the work front, Deepika will be seen playing the lead in 'Chaapak' which will be based on the life of acid attack survivor Laxmi Agarwal. Apart from playing the lead, Deepika will also be producing the venture. The film will be helmed by 'Raazi' director Meghna Gulzar and will mark Deepika's comeback in films after more than a year!