Maha Shivratri 2018: Know why we celebrate the auspicious date

Shiva devotees observe fast, visit temples and offer their prayers to the Lord. 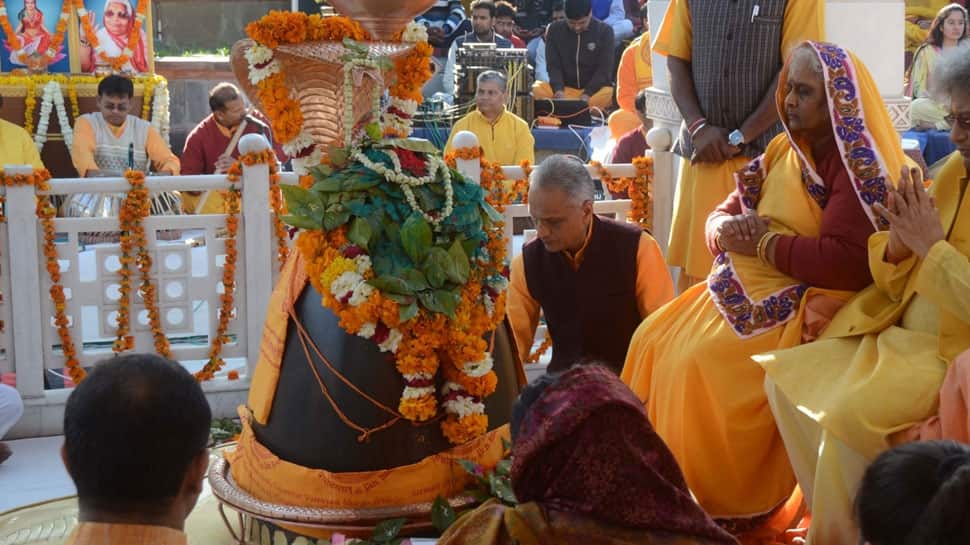 Mumbai: One of the most auspicious days in the Hindu calendar is just around the corner. Maha Shivratri dedicated to Lord Shiva will be celebrated on February 13th this year according to the Gregorian calendar.

Shiva devotees observe fast, visit temples and offer their prayers to the Lord. The significant day falls on Chaturdashi Tithi during Krishna Paksha in month of Magha in the South Indian calendar or the Amavasyant Hindu lunar calendar. However according to North Indian calendar or the Poornimant lunar calendar, Maha Shivaratri is the Masik(monthly) Shivaratri in month of Phalguna. If we were to go by the Gregorian calendar, the day falls on February 13 and extends till February 14.

And as we gear up to celebrate Maha Shivaratri, here’s taking a look at the legends associated with it.

Goddess Parvati and Shiva’s marriage:This is the most popular legend associated with Maha Shivratri. The day marks the marital union of the Lord with his consort.

Here’s how the tale of Shiva’s marriage to Parvati unfolds - After his wife Sati’s death, Shiva lived like a hermit. He was immersed in meditation and undertook severe penance. Sati took rebirth as Parvati in order to win Shiva’s heart once again and become his consort. She did rigorous penance for years and did all that she could to win his attention. On seeing her dedication, devotion and immeasurable love, Shiva accepted her as his wife.

The two tied the nuptial knot on the 14th day of the dark fortnight in the month of Phalguna.

Lord Shiva and the Samudra Manthan episode: In a contest of one-upmanship, the Devas and the Asuras – started churning the Samudra or ocean to obtain the divine nectar (Amrita) to gain immortality. While churning the ocean with Mount Mandara as the rod and Vasuki, the King of serpents as a rope, a number of beneficial things emerged from the ocean but with it also surfaced the Halahala or the poison.

Halahala was so toxic that it could ruin the creation. In order to save life and the universe, Lord Vishnu asked the Devas to reach out to Lord Shiva, who alone could consume the poison.

Lord Shiva readily agreed to consume Halahala. Fearing it could harm him, Goddess Parvati pressed his neck with her hands thereby preventing the Halahala from going down his throat. This made Halahala find refugee in his throat. Though it failed to cause harm to Shiva, it turned his neck blue. Hence Shiva is also known as Neelakantha.

In order to ensure, Halahala has no other impact on the Lord, the Devas and devotees of the Lord kept him awake all night singing praises and performing dances.

The story of how the Shiva Linga came into being: Once, Lord Vishnu and Lord Brahma had an argument over their supremacy. This created much disturbance in the Devaloka and the Devas reached out to Lord Shiva for help. In order to make Brahma and Vishnu realise that there was a supreme power governing them, Shiva appeared as a fiery flame shaped like a lingam and challenged the two to trace the beginning and the end of the beaming light.

Vishnu transformed into a boar and headed underground while Brahma took the form of a Swan to fly upward. The search turned out to be so tiring that Brahma persuaded Ketaki flower to play witness to his “achievement” of tracing the origin of the beam and convey the same to Lord Vishnu.

This is when Lord Shiva emerged in his full form from the beam. Realising that their argument was futile and their claim to supremacy meaningless, Brahma and Vishnu bowed to Lord Shiva and pleaded forgiveness.

Since Shiva appeared in a Linga form on this day, people celebrate his supremacy by remaining awake and chanting mantras honouring him on Maha Shivaratri.

Maha Shivaratri 2018: The story of Shiva and Ganga