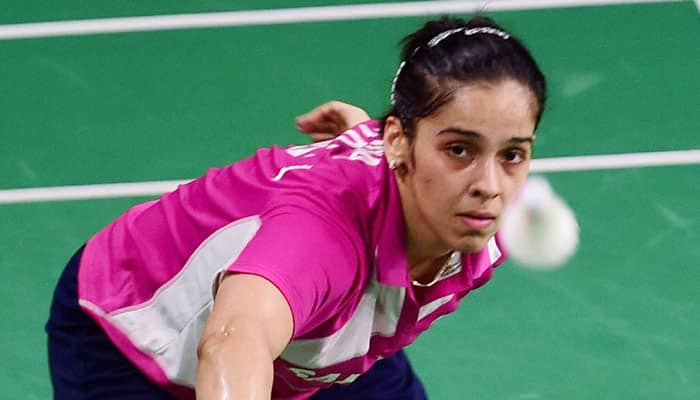 New Delhi: Ravaged by injuries in the past six months, Indian badminton star Saina Nehwal says she has gone through the most challenging time of her career and needs to get as much match practice as possible going into the Olympic Games in August this year.

"Physically, I have to be well prepared for sure as I need more match practice but mentally also I have to be strong. But I guess there is enough time for that. There will be still one and a half months to go for the Olympics after May, so no need to bother now," Saina said.

Saina had suffered an injury after her runner-up finish at the World Championship in August last but played at the China Super Series Premier, aggravating the problem which led led to the Achilles tendons. She skipped the Hong Kong Open but participated at the BWF World Super Series Finals in December. She played a couple of matches at the Premier Badminton League (PBL) but had to skip the Syed Modi Grand Prix Gold, SAG and ABC at Hyderabad.

"It was the most difficult injury that I had in my career. Achilles tendinitis takes a lot of time. I had some issue with my shin and I came very close to having a stress fracture also," Saina said. "After the World Championship I was just going through the tournaments without any practice. I was not able to train. I had to play China and Dubai. Luckily I pulled out a match against Carolina. I also had issues with my abdomen too, so I had two bad injuries," she added.

Saina said after the China Super Series Premier, she was struggling to even walk. "From January, I focused on strengthening my calf muscles. I had lost momentum but after two tournaments I feel much confident now. After such major injury, I was worried about my Achilles. Every morning I was scared to put my right leg. I'm happy that there is no pain now," said the 2012 Olympics bronze-medallist.
"But I have to keep on doing the strengthening because if I leave that the pain will come back. The Achilles has become prone to injuries," she said.

It was a combination of electric shock therapy and a new trainer which helped Saina expedite the process of her recovery. "Saina had to go through the electric shock therapy session five to six times during February. Every week she would go through the sittings for 10 minutes and it has helped her. Also there is a new training coach which helped her to gain strength," coach Vimal Kumar said.

Vimal was happy with the progress that Saina has made in the last two months. "I am quite happy with the way she has recovered. She devoted a lot of time for recovery in February. She needs that confidence for movement and stroke making. There is a lot of pressure on her. The more she plays tough matches she will get going. But I think this is the fittest that I have seen her since World Championship," Vimal said.

"Of course she can get better. But now it can't happen, there is no time. May to July will be the time when we can systematically work on that. She has done everything possible. She will play two more tournaments at Malaysia and Singapore. But now she should just focus on India Super Series."

The 26-year-old turned up for the All England Championship early this month but lost in the quarterfinals to Tzu Ying Tai of Chinese Taipei. She also played at the Swiss Open but was defeated by Wang Yihan in the semifinals.

"At All England, there was a lot of pressure and tension when I approached the net and played at the back because such shots put a lot of pressure on my right leg. So I was scared it might happen again. I might get injured again. It was difficult mentally," Saina said.

The Hyderabadi will once again carry India's hopes at the Rio Games and Saina said she will have to be physically and mentally stronger ahead of the prestigious event but there is still time for that. "Olympics is a high pressure tournament. Anybody can win. There are many top players. Every top players play with a lot of pressure when you perform well because all eyes are on you. It is not easy," he said.

Asked if the level of competition has changed compared to the 2012 London Olympics, Saina said: "The game has become faster. Not only from China, other country also playing well. Wang Shixian is still playing finals, Li Xuerui is again another player.

"Tai Tzu Ying, Nozomi Okuhara, Carolina Marin is also good. The Korean girl Sung Ji is also there. It is a positive sign. The sport has become more global."