Sarfaraz Khan played a blistering knock of 81 off 68 deliveries, laced with 12 boundaries and a six. 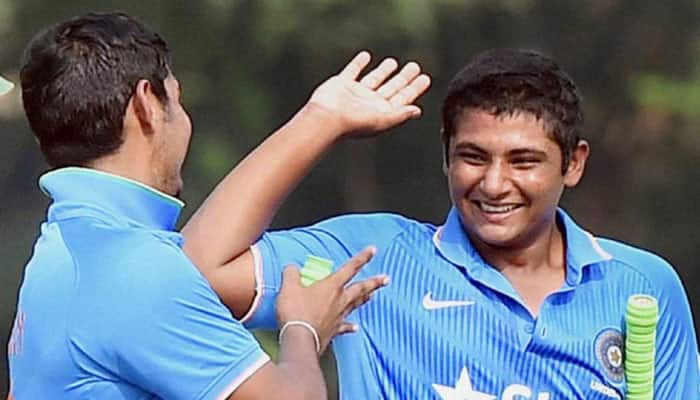 New Delhi: India continued their winning run as they beat arch-rivals Pakistan by five wickets in warm-up match of the ICC U-19 Cricket World Cup on Monday.

Sarfaraz Khan's blistering knock of 81 off 68 deliveries, laced with 12 boundaries and a six, helped India chase the modest target of 197 runs within 34 overs.

Earlier, Pakistan decided to bat first but failed to capitalise on their good start in a match, which was reduced to 45 over-a-side due to delayed start.

Left-arm seamer Khaleel was the pick among the bowlers as he scalped five wickets to skittle Pakistan under 200, who didn't even manage to play their entire quota of overs.

For Pakistan Mohammad Umar (36) and Hasan Mohsin (33) were the only two batsmen who could reach the 30-run mark.

It's a morale-boosting victory for India ahead of the U-19 World Cup, scheduled to start from January 27.

Three-time champions India, who are in Group D, will start their campaign against Ireland on January 28.

VIDEO: Virat Kohli's special message for India U-19 team ahead of World Cup