The police named rebel AIADMK deputy general secretary among several others in connection with the cash for election symbol case. 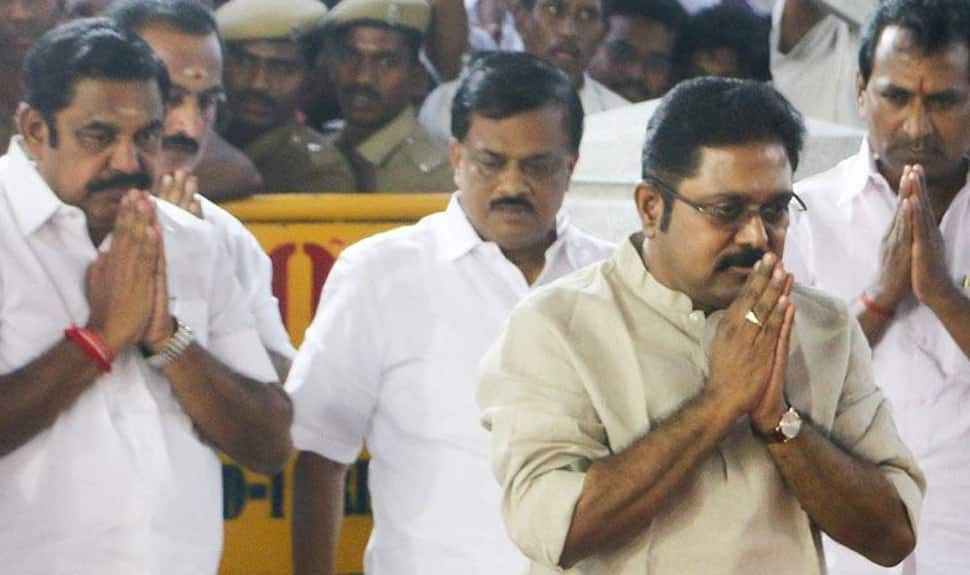 The police named rebel AIADMK deputy general secretary TTV Dhinakaran among several others in the chargesheet in connection with the cash for election symbol case.

The development comes days ahead of the high-stakes RK Nagar bypoll scheduled for December 21.

The Dhinakaran faction, which is seen as a front for the family of VK Sasikala, is already under strain. It had been subject to raids by Income Tax Department officials at around 200 locations on November 9.

Palaniswami had taken over as Chief Minister with the backing of Sasikala's family and the MLAs it controlled. It's rival faction, led by Panneerselvam, had demanded as part of the merger of the two factions that the unified party should be purged of the influence of all Sasikala family members. Dhinakaran had then broken off with his own faction.

In an interim order in March this year, the commission had barred the then rivals - Palaniswami and Panneerselvam - from using the party's name or its 'two leaves' symbol in the RK Nagar Assembly bypoll necessitated due to the demise of sitting lawmaker J Jayalalithaa.

The bypoll, for which the AIADMK had fielded Dhinakaran, was later cancelled due to alleged bribing of voters and is scheduled to take place on December 21.

Prior to the merger, the two factions had staked claim over the symbol. Palaniswami was then a Sasikala loyalist.

The poll panel had, however, frozen the symbol, pending a decision on their pleas.

On October 06, 2017, Panneerselvam and the Palaniswami camps, which merged recently, had staked claim over the AIADMK and its 'two leaves' election symbol before the Election Commission, claiming support of a majority of lawmakers and party cadre.

The Sasikala Natarajan camp too approached the EC seeking control over the party.

The EPS-OPS camp had told the commission at a hearing, which lasted two hours, that Sasikala and Dhinakaran, who was appointed deputy general secretary of the AIADMK by her, has been removed from the party and cannot stake claim over it or the 'two leaves' election symbol.

The EPS-OPS camp's counsel and former attorney general Mukul Rohatgi told the Commission that Dhinakaran was not even a member of the party the day chief minister J Jayalalithaa passed away on December 5 last year.